This Actor Found Something Disgusting in His PIA Flight and You Can't Imagine What the Airline Did Next! 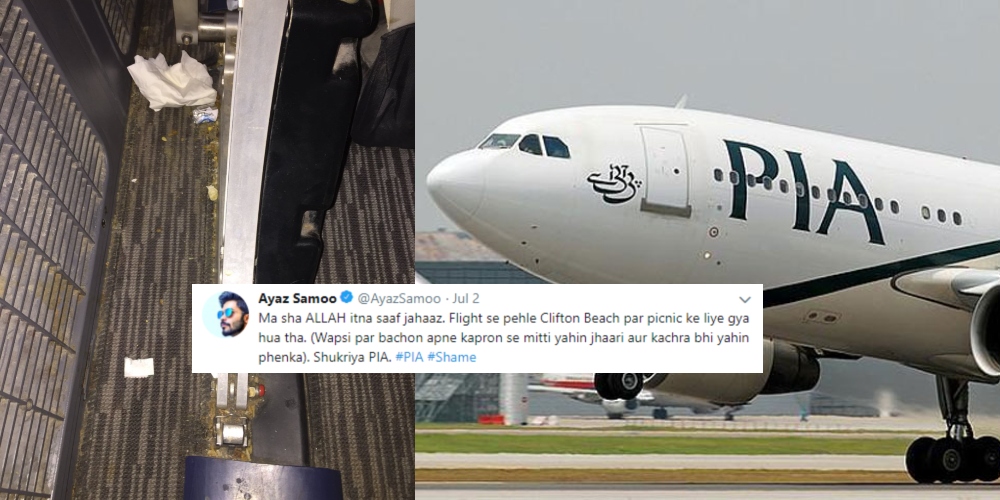 Every now and then, you would come across social media users lodging their complaints to companies after having a bad experience of using their products or services. Social media is the one-stop for consumers to review their experience. Companies are quite vigilant about answering these complaints and most importantly resolving matters that concern the customers.

In fact, you would be more obliged to write a Facebook post or Tweet or DM instead of sending an email. Prompt actions are taken on social media and businesses find it more convenient as well. Plus, they are always on the look for giving out a better image of them to people and your one post can also be viewed by so many users on social media. A similar thing happened with PIA, lately and we feel it should be brought out for people to see!

So, a Pakistani actor, Ayaz Samoo found this in the PIA aircraft he was traveling with…

It appears that the PIA aircraft was never sent for cleaning and this spot was found to be in an extremely bad state. Cleanliness is a priority when you are traveling and since so many people are onboard for hours, it could lead to a serious spread of bacteria among the travelers. Cleanliness should always be a top priority!

As we explained above the power of social media. Your word can conveniently circulate to millions of eyeballs and prompt action can be taken. It is the best source to create awareness about something now.

And PIA managed to take it very seriously!

They considered it a constructive criticism. They resoundingly took the actor’s complaint seriously and they put a strong example for businesses out there.

Thanks for sharing this Ayaz, based upon your feedback the plane was immediately sent for cleaning and here is the latest picture. pic.twitter.com/6dokVD7LUA

Moving on, the actor noticed that they took prompt action and decided to also point out and praise PIA for their effort. Now, this is something to appreciate because they took the effort here!

Here is an obvious message to each and every Pakistani that your voice can make a difference. Use it for good, for a better Pakistan. Thank you PIA for taking responsibility and to improve things, I’m really glad to know that. Plus my today’s flight was on time as well. ??? #PIA #RaiseYourVoiceForGood #AS

What do you guys think about this?

This Guy’s Photoshopping Skills Are Next Level And He Should Be Titled As The “Photoshop King”
These Terrifying Pictures After The Lahore Rain Will Make You Say “Ya Allah Reham!’
To Top