PML-N's Abid Sher Ali Gets Called A 'Thief' During An Event In London!

Pakistan’s political aura has always been a critical one for the ruling power as the corrupt opposers try to annihilate their way in. However, now, it seems like things are finally changing for the better as the common man has started to speak. Recently, Pakistan Muslim League Nawaz (PML-N)’s Abid Sher Ali was immensely humiliated and called names while in an event in the United Kingdom (UK).

Abid Sher Ali faces embarrassment after being called a ‘thief’ during a London event!

Well, this isn’t the first time, the members of PML-N have faced criticism in the UK reflecting over to their past corruption. However, PML-N leader Nawaz Sharif’s deteriorated health has several party members in London including Abid Sher Ali. Last week, on Saturday, the former federal minister Abid Sher Ali was caught in an embarrassing situation after being called a ‘thief’ in a public event in London.

The former minister was invited to the 17th Pakistan Community Achievement Award organized in a London hotel. According to official media reports, the organizers called on PML-N leader Abid Sher Ali to distribute awards among the recipients. But, things escalated quickly after a community leader, Attaur Rehman came onto the stage but denied receiving his award.

After the name announcement, Rehman stood up, went to the stage, called Abid Sher Ali a ‘thief’ and didn’t accept his award. Particularly, he held the mic and said, ”Main choron (thieves) se award nai leta, shukriya” which sparked chaos on the venue. Seeing the whole scene, some people even from the audience appreciated the recipient for standing against the corrupt politician. 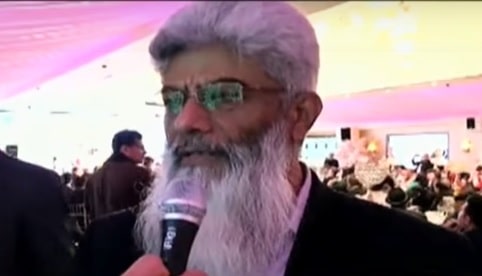 Moreover, chanting anti-PMLN slogans led to Abid Sher Ali leaving the event in between his ending speech. Amidst the chaos, the former minister made a conclusive speech and left the event. As per the details, Ali without worrying about the audience chanted ‘Nawaz Sharif Zindabad’ at the end of his speech, which could have made the situation much worse.

What do you think of the incident? Tell us in the comments section below!