Weddings and their management both comprise of numerous duties and responsibilities to be fulfilled. From booking the hall arrangements to decor and of course, photography to save all those beautiful moments. However, when it comes to Pakistani weddings, booking the photographer is no big deal, provided we have Abdul Samad Zia to take over that role! But recently Twitterati roasted photographer Samad Zia and he handled the trolls like a boss.

This Pakistani photographer just knows how to work behind the camera, and his art is beautiful. He has been the one behind the beautiful pictures of our favorite celebrity couple Sarah Khan and Falak Shabbir.

The new couple is not stopping posting their photographs together on social media. Netizens have had enough and even trolling Sarah and Falak for that. Of course, Zia is their photographer and now they netizens are after him.

While Twitteratti roast Zia, he is also toasting each troll like a pro

The best part was that our talented photographer Samad Zia, apart from his talent behind the camera, also knows how to entertain trolls and respond to them. Don’t believe us? Check these responses Zia is giving to his trolls, they are hilarious. 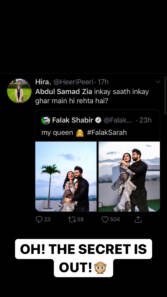 The best part about this entire scenario is that Zia managed to make these trolls sound even more funnier and proved that humor is far more better than anger in such situations! 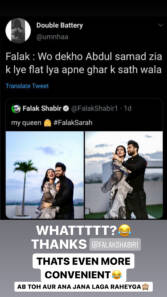 Some even commented on how Zia is now Falak’s neighbor and boy this just made the situation far more hilarious than it is!  Although Zia took this opportunity to inform his troll, that it would make it even more convenient for him. 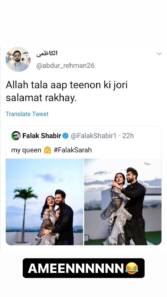 While some took the opportunity to congratulate the trio Sarah, Falak, and Zia on a happy marriage. Yes! Pakistani netizens can go that far. Surely, not as far as Zia though, he just managed to seal the deal with an all strike, by commenting a big ‘AMEEN’. 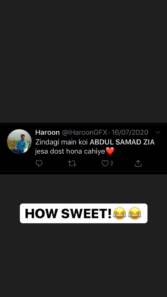 In addition, some are even commending that they desire for a friend like Zia! Sweet isn’t it?

While we all are having a good laugh at the moment with these hilarious banter between this Pakistani photographer and different netizens, we are sure Zia might be busy photographing another Pakistani celebrity very soon.

In the end, there is no doubt that the photographs Zia captured on Sarah and Falak’s wedding are beautiful. He surely knows how to take the living moment and make it stand out. We love his artistic and glamorous style through which he takes photographs.

Regardless of what is and what isn’t, we are truly in awe of his chill, cool and suave way of handling trolling netizens. Just imagine any other star getting trolled this way; we all know how the situation would have spiraled. For instance, Nadia Hussain’s way of handling trolls still gives us chills. Won’t you agree?