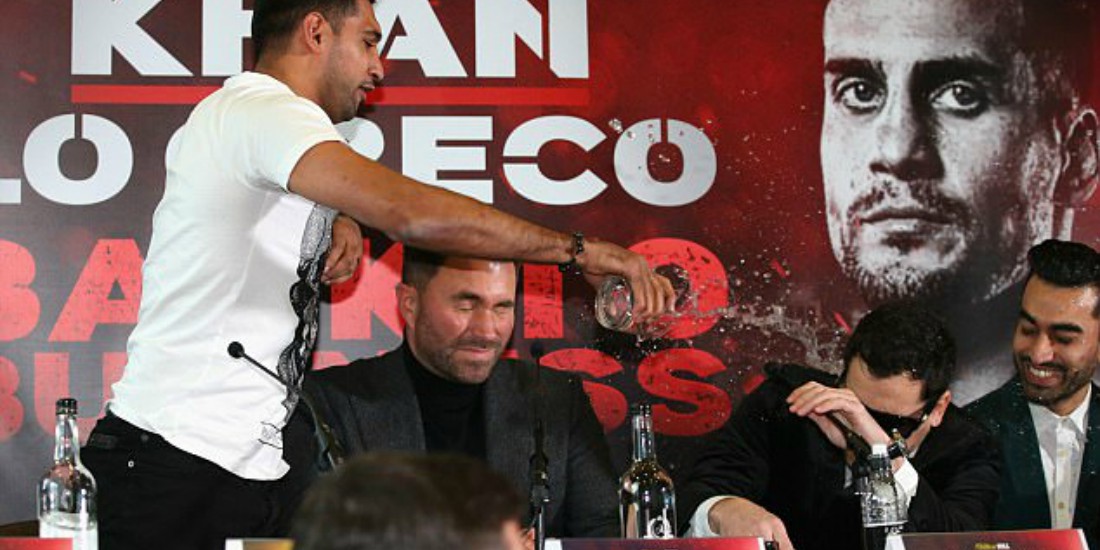 It’s obviously unethical to talk about someone’s personal life, but when you do, get ready for a severe reaction. Yesterday, Aamir Khan threw a glass of water on the opponent, Phil Lo Greco, for talking about his personal life.

Some times press conferences can get out of hand. We are fighters and should talk boxing, not personal life problems. Lo Greco showed disrespect.

Here’s what agitated Amir Khan, Lo Greco said: “After the Canelo loss you went on a losing streak – family, wife, and then you go out and tweet to the heavyweight champion of the world. What is wrong with you, mate?”

Lo Greco’s remark was in referencing was to a tweet Khan sent to Anthony Joshua in August 2017. It concerned his own marriage and Khan later apologized to the British heavyweight for sending it.

He got what what he asked for, What a joker. Can’t wait for the fight on 21st April, Liverpool we coming. https://t.co/d7WxHZGjvk

After security controlled the situation on stage, promoter Eddie Hearn asked Lo Greco to apologize, while Khan later said his rival’s behavior would serve as motivation to “give this guy a beating”.

To All the Padmavat Fans, Here’s The Heartbreaking Truth the Film Failed to Show
According to Human Psychology, Here’s Why We Fall in Love with Difficult People
To Top