Middle East – the birthplace of the world’s second largest religion. A house designed by Europeans but sat on the foundations of Ottoman Empire, and once considered to be the center of trade and business. There was a time when its monarchies and militaries defeated those of Europe’s and provided stability for decades but “the worst and the best thing about time is it never remains the same.”

The 21st century’s the Middle East will certainly not be remembered the way it did before. It houses one of the world’s biggest conflicts, violence, unrest and war-torn countries. But all of these conflicts, whether it involves Iraq, Lebanon, Syria or Yemen, share a common factor. The rivalry for power and influence between the two ideologically different giants of the region, Saudi Arabia, and Iran. The relationship they hold is full of tension and hostility, and both have become the cause of destruction for their financially less fortunate neighboring countries who frequently becomes the victim of their proxy wars.

Both of them back opposing sides in the Syrian civil war and many other conflicts in the Middle East. The situation in Syria, where it all started as a peaceful protest against the pro-Iran Bashar-ul-Asad regime but things quickly escalated after the use of chemical weapons. To get rid of the regime, US intervened but had no plans to send ground troops this time (a lesson from Iraq).

Seeing Iran-backed regime, the United States old friend Saudi Arabia couldn’t have resisted but to help them fuel up the rebels to fight against the government. Not to mention the rise of the so-called Islamic state which may or may not has some backing of Saudi Arabia, fingers crossed! Although the situation in Syria was not really pushed by Saudi Arabia but they surely played a big role mounting it. 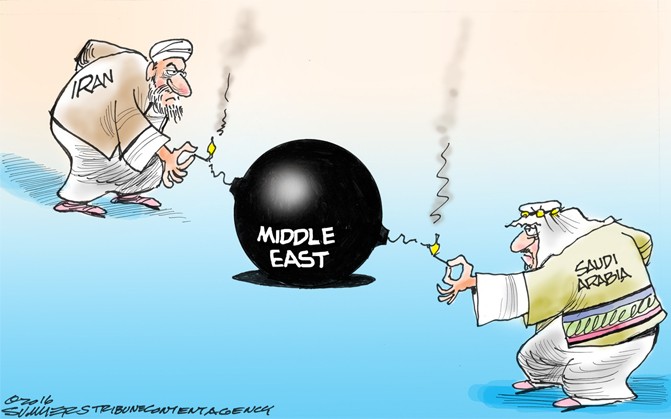 On the other hand, a weak and struggling Sunni-led government’s decade-long fight against the Shiite rebel group Houthis gave up after groups uprising due to Iran’s backing and hence the start of a new civil war was inevitable in a poorly governed Yemen. Having border with the Kingdom, it could serve as a good friendly base for Iran’s operations in KSA.

This is exactly the reason Saudi Arabia went overboard and made coalitions with nine Middle Eastern countries hammering the rebels from the sky and killing millions of innocents as collateral damage. Of course, Iran has denied the allegations made regarding their support of the Houthis but they have been caught red-handed many a time i.e. Iranian-marked weapons seized from a ship off the coast of Yemen allegedly was to be delivered to Houthis – Reported by CNN.

The two countries use religion as a tool in their rivalry as Iran is a Shiite-majority region while Saudi Arabia a Sunni/Wahabi majority country. They are often caught in a war of words accusing each other of not being the true Muslims. Such statements from either side can trigger an outrage in the countries like Lebanon or Pakistan which constitutes both the Sunnis and Shiites, and both sides do not tolerate anyone saying anything against their respective sect countries. Pakistan’s foreign policy relating to KSA and Iran has, therefore, remained admirably over the years as they have been smart enough not to pick any sides between the two.

We all witnessed a recent instance of it when the Saudis were gearing up for the “Coalitions Army” for Yemen and asked Pakistan to join the coalition force, which later on Islamabad refused on the basis of the unanimous vote held in the parliament. Though Pakistan faced a backlash from the Saudi Arabia and its Middle Eastern allies like the United Arab Emirates but it was a decision worth applauding for.

According to Syrian Centre for Policy Research, there have been more than 470,000 casualties over the period 2011 and 2016. In Yemen, the estimated death toll is of at least 10,000 in one year according to the United Nations. And these figures were only taken from different hospitals/health centers. It does not account for those who get killed and are buried before any official record was made.

Normally when two boxers fight, the audience enjoys the match. But this is a different kind of match with a somewhat different set of rules, here the audience suffers instead. A match they didn’t opt to be a part of. A match between two rich countries seeking power and control over the Middle East by putting millions in harm’s way who don’t have anything to do with their rich agendas.