There is a very general perception in our society that if the wife earns more or is more qualified than the husband, it hurts his ego. Given so, even during the process of looking for the ‘ideal bahu’, families usually go for a woman who is less educated and earns less compared to the man.

While a lot may think that there is no truth to this perception, this recent news indicates the exact reason why it hurts the ego of a man.

30-year old Rafiqul Islam blindfolded his 21-year old wife Hawa Akhter by telling her he has a surprise present for her. He tapped her mouth after blind sighting her, took out a knife and chopped five of her right-hand fingers so that she wouldn’t continue studying. Rafiqul Islam, a migrant worker in the United Arab Emirates often told his wife to stop studying, given he had just studied till 8th grade.

While visiting his wife in Bangladesh, he lured her into believing he has a surprise for her and then chopped away her fingers. A relative present during this scene trashed Hawa’s fingers so that the doctors could not reattach them. 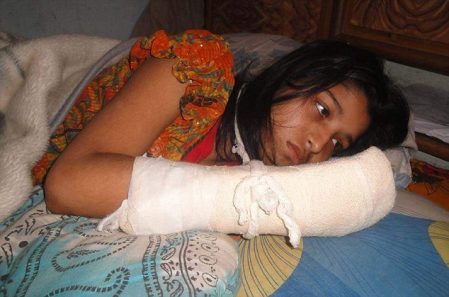 “After he came back to Bangladesh, he wanted to have a discussion with me. “Suddenly, he blindfolded me and tied my hand. He also taped my mouth saying that he would give me some surprise gifts. But instead, he cut off my fingers.” Hawa Akhter told The Times.

According to the Bangladesh Police Chief Mohammed Saluddin, Islam confessed to his crimes as soon as he was arrested. “He was enraged. He was jealous because while he only had a grade eight standard education, she was off to college to pursue higher studies.”

Hawa is now back at her parents’ house where she intends to learn how to write from her left hand so that she can continue her education.

It is important to understand here that Allah has different plans for everyone. If Mr. Islam could not continue his higher education, his jealousy had nothing to do with what He had planned for Hawa. Pushing down someone because you were not able to get the same highlights, not just jealousy, but also how ego can ruin lives.