A Civil Aviation Authority Employee Caught Abusing Pakistan in a Brawl with the Locals!

When it comes to the airline flights in Pakistan, off and on we come across complaints. Be it the food, the services or delay in flights, the issues locals share are not new.

The recent queries a lot of locals are sharing is how the authorities are entertaining the international passengers as the first priority – delaying the services provided to the locals.

In the light of the same concern, earlier today there was a huge fight at the Karachi Airport.

The brawl happened outside the immigration queue between the local passengers and a Civil Aviation Authority (CAA) employee. The locals were seen complaining about how the workers were entertaining the foreign passengers at first.

This made one individual furious, raising his voice towards the CAA employee. In the midst of the arguments, the CAA abused Pakistan and also misbehaved with passengers.

As the employee said harsh things regarding Pakistan in his anger, other passengers cried to calm him down, while others got more furious at him. 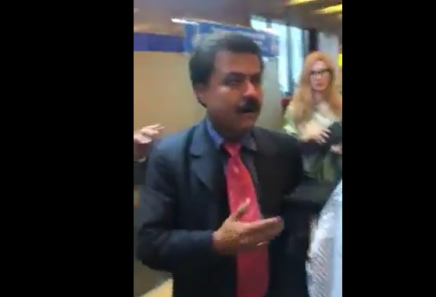 Here’s What Happened At the Karachi Airport

There could be a possible reason that the man was pushed to the verge of losing his temper. The policies sometimes are not in the hands of the CAA employees but the higher authorities in charge.

However, abusing the country is by no means acceptable!