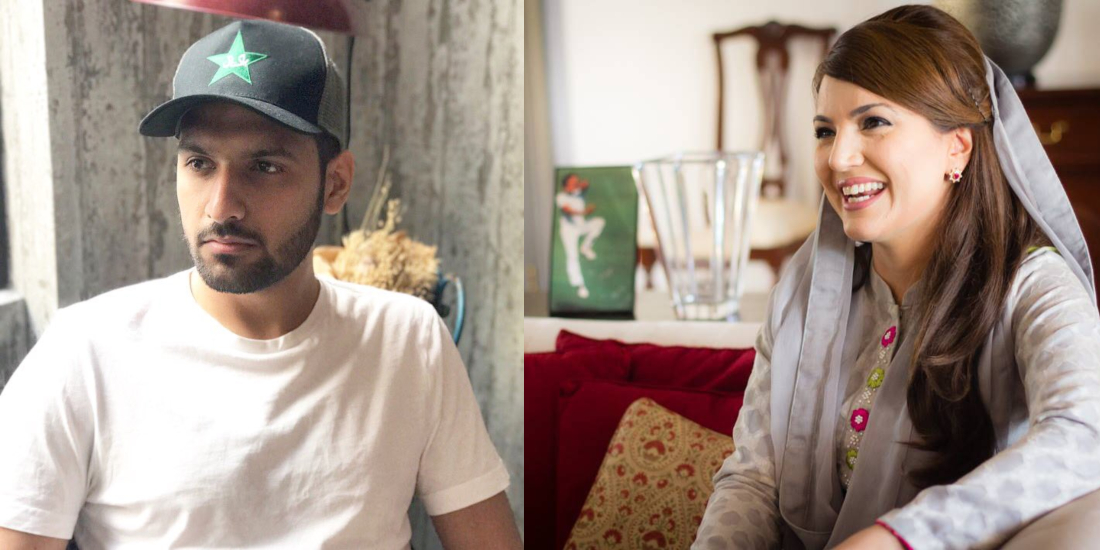 TWITTER WAR! Oh, yes. From last few days, Twitter is just completely filled replies of Reham and Zaid. Reham Khan, as we know, has snatched all the botis of PTI and Imran Khan. By that, we mean peace! Though they don’t really care much about what she’s been saying so far but the fans and all the other pyary Pakistani are pretty much offended by what she said.

Reham has offended people by telling almost EVERY personal detail about Imran Khan. Not just that, but details of relatives and friends of Imran Khan as well. She wrote about people who she met during their marriage of barely one year like baji? Bas kar jaein. Along with that, she offended Jemima Goldsmith, by writing about her son where Jemima tweeted she will not let the “Libellous” book get published. Alas!! It got published, it got sold.

But coming back to the Twitter war, Zaid innocently tweeted one day that his only dua before bed is that he may never end up having an ex like Reham Khan! AWWW.

To which Reham said that I pray that you never have to live with a drug abuser and a cheat. WOAHHH! Ladies, she talkin’ about IK. Okay?

Zaid got badly offended by Reham’s tweet and started saying that it’s actually you(Reham) who seems to be under the influence. 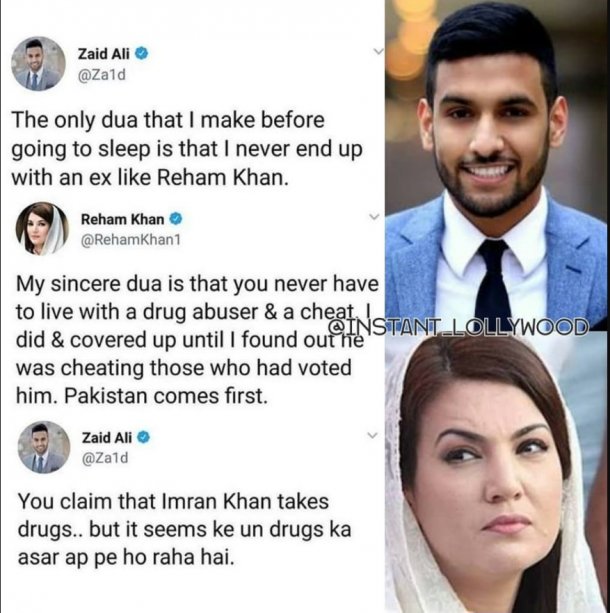 Just because someone is educated does not mean they are well mannered. Education does not teach us manners, its our upbringing that does.

So, the point is Mr. Zaid, she too is wrong by publically opening IK’s life and kabab platter but how does that make you any right. Uttering such whataboutism will not take any place better.

Come on!! Accept that you did wrong. Stop beating about the bush

Reham khan can write an entire book insulting and degrading Imran khan.. who is our prime minister.. but when I make a tweet about it.. all of a sudden there is the female card. I guess this is gender equality.

You’re standing against @RehamKhan1 because she insulted your leader? You’re trolling her because she degraded and insulted him? But you’re doing the SAME to her!!And when people are bashing you for doing the same you’ve out of no where came up with this women thing?

Your wordings were so strict and hateful.
Why you don't get that it is biography not a novel
She wrote as it happened you can say lie but not spread the hater against her

The more you talk about Reham, more you get exposed about your subconscious thinking process. Well done dude well done. Living in Canada couldn't change your perspective about women then what will. I guess it's about upbringing isn't it?

@RehamKhan1 is his ex-wife and has all the right to say whatever she feels like! @ImranKhanPTI is still alive to defend himself! Don't think a public figure like yourself should speak about a woman that way! #dontbehisdaddy

I was gonna tell you to stop embarrassing yourself but I realised you’ve made a living out of it so no point,but just curious,do you personally know the woman? she was like married to the guy she shared her *own* experiences with, didn’t just randomly start trolling him online..

The problem with people when trying to be the best of moral police is that they forget that line of ethics. It’s fine when you want to teach someone a lesson (though you don’t know them). But be careful when you started disrespecting someone, and later when you are taught behave don’t tell them that they did the same. Not a sane argument!