The Pakistani weightlifter Rabia Shahzad won the gold medal at the Hampshire Weightlifting Championship. The 21-year-old flew all the way to Basingstoke to participate in the competition where she won another medal.

The competition was basically judged according to Sinclair points which are given by calculating the lifter’s weight with the total amount of weight that they lift. Rabia Shahzad was able to grab the gold medal by scoring a whopping 144.48 Sinclair points. 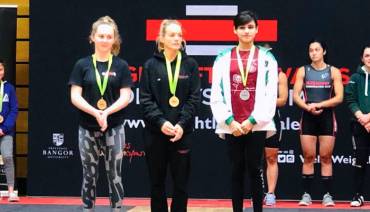 It is for sure that the young athlete was able to make Pakistan proud through her consistent achievements. Social media users in the country have been praising the girl for her hard work. It is a great feat that she is able to promote a positive image of Pakistan by displaying her impressive skills.

Winning medals in international competitions isn’t a simple nor easy achievement. Moreover, such accomplishments can help inspire other women in the country to pursue a sporty career. Not many Pakistani women have been able to make it big in the sports industry so seeing Rabia break such stereotypes is refreshing.

Previously, Rabia Shahzad also won the silver media at the Welsh open in the 49kg event. And she has won the gold medal in the Ralph Cashman Open Weightlifting Championship in 2018. Considering that she already has grabbed medals at world competitions, she will definitely be achieving more success.

How She Can Change The Perspective Of Sports In Pakistan:

Even though Pakistani schools tend to encourage children to participate in sports but not many pursue it further.

This is because there is a prejudice against resorting towards sports as a career. People believe that it is difficult to earn a livelihood as a sportsman because not everyone makes it ‘big’.

However, that reduces and undermines the dreams of the youngsters who want to pursue a career in sports. Therefore, it is the duty of the citizens to ditch this mind-set and be accepting of people that play sports for a living. They can grow up to become someone as influential and talented as Rabia one day.

Additionally, Rabia is the sister of the infamous badminton sensation Mahnoor Shahzad. It is for sure that the two sisters are making history for women in sports.

When asked regarding the win, Rabia gave a humble response, “It was a different experience for me; events in the UK are usually held on the basis of Sinclair points instead of different weight categories and I am happy to be winning the gold medal here,” she mentioned.

It would be an exaggeration to say that she wouldn’t be nervous or confused about the system in the UK. However, her spectacular way of taking in the pressure and grabbing the gold medal shows her consistent sportsman spirit.

Narendra Modi’s Plogging Is Being Trolled On The Internet!
World’s Most Expensive Shoes With Diamonds Unveiled!
To Top