Touching the heart’s of masses across race, religion or any orientation is a work of love. Love that is spread in unique ways, certainly by words sometimes. Late Nazia Hassan was one such individual that graced the hearts of many with the love she spread from her iconic songs.

It has been 20 years since we lost a singing icon who redefined our music industry and continues to propel the current with her legacy. Nazia Hassan as we know is more than a mere addition to the list of musicians that have graced the Pakistani music industry in the past. She is exemplary for today’s multi-talented generation. Her songs ignited the spark, sowed the seed that grew out to be a giant industry swamping of artists we have today. Still, no song today matches the stature.

Setting trends, her songs were far-reaching, loved and embraced by not only her local fans but disbanded consistently in foreign countries, settling her fanfare all along. Nazia Hassan is a recipient for the Pride of Performance, Double Platinum Award and Golden Discs Awards. 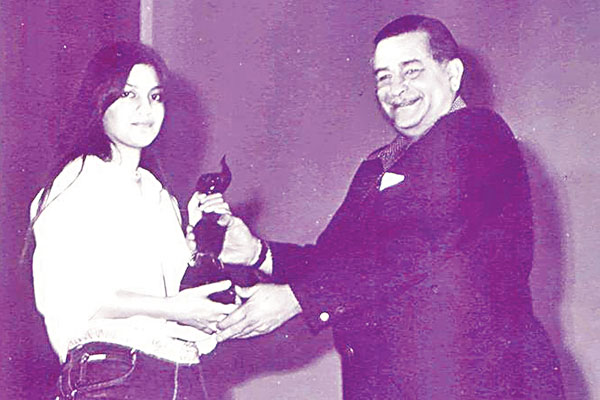 Probably the best of Nazia Hassan’s iconic songs and most popular as well. During the release of Aap Jesa Koi, Nazia was one such individual that followed a charming personality and mesmerizing voice. Of all her songs, this particular one shot Nazia to imminent popularity and commendable success. Easy to say her career’s climax had already reached with this song’s release.

Vocals from Aap Jesa Koi makes it hard to believe that they come from only a fifteen-year old’s mouth. Hassan was initially spotted by noteworthy Producer, Biddu, who suggested Feroz Khan about her. It was sung for Qurbani – a movie by Feroz Khan, which just like its OST, reached a staggering level of success in 1980. In fact, it turned out to be the biggest hit of the same year.

This song has a remarkable temperament about it. It reached global success as Hassan’s fans across the globe became fond of it rapidly. To remark her magnificent entry into the music industry and acknowledge her amazing work, Hassan was awarded the glorious Filmfare award for her song.

Followed by claiming spectacular success from Aap Jesa Koi, this song remained a popular hit. Hassan and her brother Zoheb Hassan formed a duo and penned signatures on a proposal of the notable Producer, Biddu. The name of the album traced the song, in fact, and turned out to the Asia’s best selling album of that era. Consequently, the album Disco Deewane led charts in Russia, West Indies and numerous South American countries as well. It brought a new brace to the music industry in Pakistan and India.

The popularity of Hassan, in particular, was surging around the world because normally people would not expect a rising star from that region to make its way into an elite class of artists. Disco Deewane‘s popularity and success finish a race apart.

Still, today, Hassan’s fan find this song among the few entries to embrace their hearts deeply. The height of popularity in Bollywood-inspired Karan Johar to use a revamped version of this song into the Bollywood film, Student of the Year in 2012.

The pop sensation released another trailblazing song into the music industry. This song made a unique mark with its sweet tune and charming beat. The contemporary element in Hassan’s voice certainly played a prominent role in uplifting the standards and impulse of this song. Its music video also plays a vital role in revitalizing the appeal of the track.

Easy to mention, this track naturally channeled its way of being one of the best of Nazia Hassan’s songs due to its substance.

As the name suggests, this song ne waqai Aag laga di thi. Aag remains a significant entry in propelling Hassan’s career in terms of success. It was released in 1995 and remained top. Car audios were on the rise during this period and people seemed to play this particular song repeatedly.

Enthralling audience as far as Europe and Americas, the music video of this song is certainly an enjoyable one. Looking back to it compels us to realize what a magnificent show of creativity producers managed to curb out of resources of those times. Writing about this song has naturally made me mumble it…

Remembering our junior school days in the 90s when one of our excitements and reasons of enjoying school life were seasonal functions and events. Surely, you must have heard anyone singing or performing this song on “Friendship Day”.

Incorporated by the equally charming vocals of Hassan’s brother Zoheb, this particular song has a rousing and uplifting ring to it, close to being anthemic. Teenage girls used to sing along, marveling at the glory of little friendships they acquired in their life.

Throughout history, you may find Dosti’s relevance as quickly as anyone mentions the idea of “friendship”. The popular culture could still not get enough of this song, as recently, Zoheb collaborated with team Coke Studio and produce a new version of it that got featured in megahit movie,

Teenage girls used to sing along, marveling at the glory of little friendships they acquired in their life. Throughout history, you may find Dosti’s relevance as quickly as anyone mentions the idea of “friendship”. The popular culture could still not get enough of this song, as recently, Zoheb collaborated with team Coke Studio and produce a new version of it that got featured in megahit movie, Ho Mann Jahan. Today’s generation resort to Taylor Swift to taste the same notion as this song enforced back in 1995. Could anyone of us have imagined such standards being incorporated 21 years ago? Another entry produced by Biddu, which as always gladdened its popularity by remarkable standards.

This song basically spoke the heart out of many women who prevailed in emotions about their significant other or love interests. Another song that captivates your mind and you catch yourself singing randomly.

As people looked to express their deep emotions about unfaithfulness in love. This song basically spoke the heart out of many women who prevailed in emotions about their significant other or love interests. Another song that captivates your mind and you catch yourself singing randomly.

She was ideally the “Queen of Pop” in Pakistan. She asserted the notion that achieving meritorious success had nothing to do with age and gender. Nazia and Zoheb’s duo was one of the most successful ones of that time. Their incorporation saw a vanquishing 60 million records in sales all over the world. Without a doubt, her memories would remain alive in our hearts and her music would glare like a radiant symbol of splendor for all times to come.

“As with everything, you carry on. Even when you have bad days.” – Nazia Hassan