Indian extremists attacked the house of Amulya Leona, the Indian girl who made headlines for chanting ‘Pakistan Zindabad’. She was at an anti-CAA rally in the southern city of Bangalore. Amulya was participating in a demonstration against a controversial Indian citizenship law.

Indian media reported that some miscreants threw stones at her house. The windows of the house were broken in the incident. Security is provided to her family after she was sent to jail on 14-days judicial remand. Indian police have filed sedition against her. 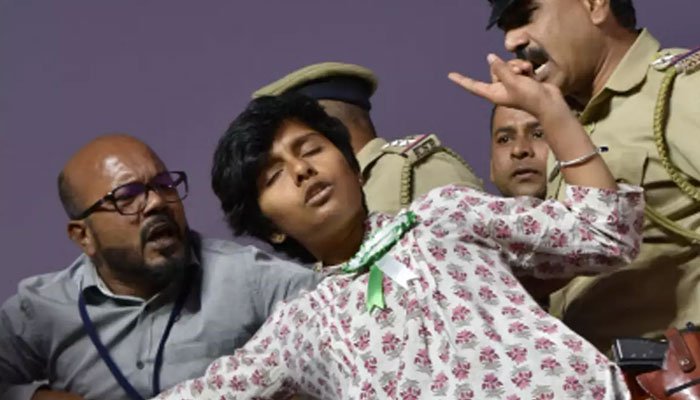 The 19-year-old raised the pro-Pakistani slogan at a rally organised by All India Majlis-e-Ittehadul Muslimeen (AIMIM) chief Asaduddin Owaisi in Bengaluru. Amulya chanted the slogan repeatedly when she was invited to address the gathering.

Read Also: India Is No More A Secular Nation State

However, after which the AIMIM chief Asaduddin Owaisi prevented her from raising the slogan. She was immediately whisked away from the stage and was arrested.

Owaisi disassociate himself from Amulya to avoid controversy

Furthermore, condemning the incident, Owaisi then addressed the gathering and said that he did not agree with Amulya’s stance and that his party had no links with her.

“Neither I nor my party has any link with her. We denounce her. The organisers should not have invited her here. If I knew this, I would not have come here. We are for India and we, in no way support our enemy nation Pakistan. Our entire drive is to save India,” he said.

Amulya’s father Leona Noronha also condemned his daughter’s act. Speaking to the media, he said, “What she said is wrong. Some Muslims joined her and she wasn’t listening to me!”.

The 19-year old girl is trending all over the world

The video of the incident is going viral on the internet. The girl is now trending all over the world for her bravery to step up for the right.

#WATCH The full clip of the incident where a woman named Amulya at an anti-CAA-NRC rally in Bengaluru raised slogan of ‘Pakistan zindabad’ today. AIMIM Chief Asaddudin Owaisi present at rally stopped the woman from raising the slogan; He has condemned the incident. pic.twitter.com/wvzFIfbnAJ

However, Indians are not happy about the incident. They are targeting Amulya and her family, calling her traitor. Some are also telling her parents that they had not brought their daughter up properly. Furthermore, they are threatening her father to not get bail.

This is not the first time when Indian extremists attacked someone for expressing their views. Muslims in India have faced similar behaviour when they try to raise their voice for their right.

Biopic On Former Cricketer Wasim Akram To Hit Cinemas This Year!
F.R.I.E.N.D.S. To Reunite After 16 Years On HBO Max!
To Top