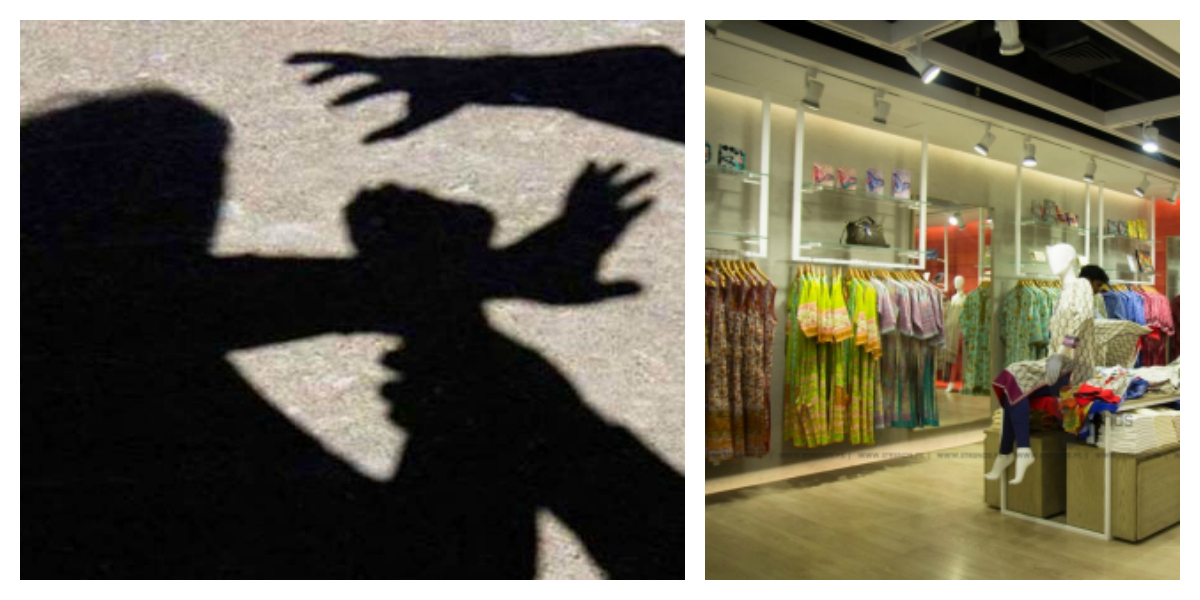 Some human beings out there are less human and more animal in nature. It is sad and disgusting, but it is true. Unfortunately, one such person was working at the popular clothing store called Zeen. 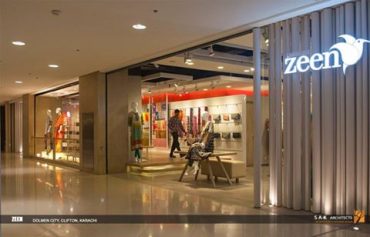 The person was working in the Dolmen Mall, Tariq Road outlet. Even though the store was mostly empty, it did not stop him from molesting a girl who was there with her mother. She relayed her incident on the Facebook page, Girls at Dhabas.

The text reads as follows:

I was inside Zeen at Dolmen Mall, Tariq Road in Karachi. For those who don’t know, Zeen is a venture by the clothing brand Cambridge, and it specialises in ‘women’s clothes’.

The store was mostly empty, apart from three or four staff members and a few women and kids. Hardly the kind you would describe as crowded. I was standing with my mother, busy checking out a dress when I felt a hand touch my butt/thigh very firmly, the kind of touch you can’t mistake for an accident.

I immediately turned around and shouted at the man standing there– who turned out to be one of the staffers!

“Dekh ke chalo, kya kar rahay ho?” [Watch where you’re going, what do you think you are doing?], to which he said: “Galti se lag gaya” [It happened by accident].

My mother began screaming at him at this point too. And he had the audacity to say, “Jagah nahi thi” [There was no space] when really, there was room for more than two people to pass easily behind me, without bumping into each other.

I managed to get out the employee’s name — Najeeb (assuming that is his real name) and learned that he was fasting (!), but aside from that, even though the rest of the staff gathered around us and learned what had happened, no one was willing to give out any information about him, or help us report him to the manager.

Where my mother and I were expecting the store’s staff to be horrified by what had happened, and to assure us that some sort of accountability would be held, they reacted in quite the opposite manner: they kept apologising on his behalf, asking us to let go of the matter, and when we asked for a comments/complaint card or the manager’s number or some way to report the harassment, they did not provide anything, and kept assuring us they would forward the complaint themselves.

When my mother wondered out loud how many girls Najeeb might have harassed before, one of the female staff members answered back with a smile: “Nahi jee, yeh pehli dafa hua hai.” [No, this has happened for the first time]

This woman, along with the rest of the staff, continued protecting Najeeb and his personal information, despite our persistent demands. We were not even able to learn his full name. Towards they end they had the gall to say: “Ab woh admit kar raha hai ke uss ne kiya tha, toh bass rehne dayn! Hum khud hi kar leyn ge.” [Now he’s admitting he fucked up, so why don’t you leave it at that. We will deal with him ourselves]

As if admitting you violated someone’s body makes his action okay!

I am certain I am not the first girl this has happened to, but that does not mean it is okay.

Eventually, my mother and I had no other option but to leave. Even while we were dealing with the store staff, I was– and still am — quite traumatised, but the reason I didn’t let this matter go, and the reason I am writing this post now is because I don’t want this to happen to any other girl, ever, and because I want to call Zeen out for their messed up way of dealing with their customers’ complaints — especially one of such a horrific nature.

Zeen should take immediate action and fire that employee — no space should tolerate *any* kind of harassment to the people who occupy it, especially one which claims to be for women.” 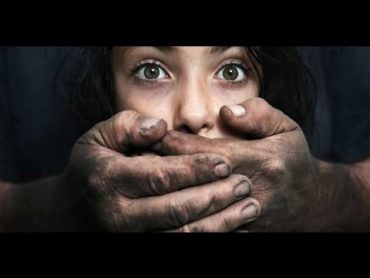 His behavior was absolutely vulgar and shameless. Not only that, but all the fact that all the employees at the store were backing him up made things all the worse. It seemed like there was nothing that could be done about it.

However, the owners took notice. And they took the necessary step. The only step. They fired the employee. 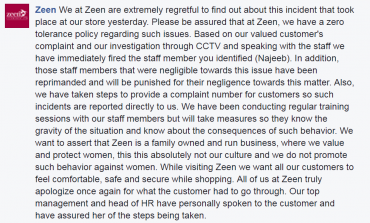 “We at Zeen are extremely regretful to find out about this incident that took place at our store yesterday. Please be assured that at Zeen, we have a zero tolerance policy regarding such issues. Based on our valued customer’s complaint and our investigation through CCTV and speaking with the staff we have immediately fired the staff member you identified (Najeeb). In addition, those staff members that were negligible towards this issue have been reprimanded and will be punished for their negligence towards this matter. Also, we have taken steps to provide a complaint number for customers so such incidents are reported directly to us. We have been conducting regular training sessions with our staff members but will take measures so they know the gravity of the situation and know about the consequences of such behavior. We want to assert that Zeen is a family owned and run business, where we value and protect women, this this absolutely not our culture and we do not promote such behavior against women. While visiting Zeen we want all our customers to feel comfortable, safe and secure while shopping. All of us at Zeen truly apologize once again for what the customer had to go through. Our top management and head of HR have personally spoken to the customer and have assured her of the steps being taken.”

Bravo to Zeen for doing what needed to be done without so much as a second thought. However, this is a one off situation where the management actually took notice and did something. There are countless incidents like this that are unreported and we all need to play our part to make a change to make this world safe for women and children everywhere.