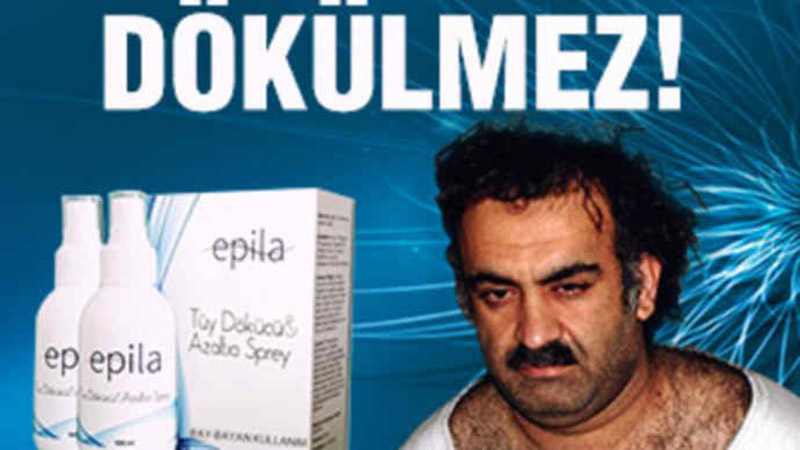 Self-confessed 9/11 architect, the hirsute Khalid Sheikh Mohammed, has appeared as a pitchman for an online campaign for a range of hair removal treatments – but the Turkish company behind the ads says the terrorist’s image was used by accident.

Next to the slogan “That hair will not shed itself!” is an iconic picture of the disheveled Al-Qaeda terrorist, taken after he was captured by US forces in 2003, and a series of white plastic bottles.

But the company in question, Epila, says that this was not a viral marketing stunt.

“We didn’t know that he was a terrorist. This image is in popular use in Turkish memes on the Internet. The guy is quite hairy, so we thought his body was a good fit for our ad,” Mehmet Can Yıldız, a company representative, told Turkey’s Hurriyet newspaper.

“We didn’t want to imply anything political. We didn’t know that it could become an international story. I repeat: We featured him for his hair, not terrorism.”

The Kuwait-born, US-educated Mohammed is currently in Guantanamo prison, awaiting the long-delayed trial for organizing the 2001 attacks on the World Trade Center attacks that killed nearly 3,000 people. He is also implicated in over 30 other terrorist attacks and the beheading of US journalist Daniel Pearl in Pakistan in 2002.

“I am the mastermind of 9/11, not Osama bin Laden,” Mohammed once boasted during a pre-trial hearing.

This is not the first time Turkish companies have used dubious figureheads for their ad campaigns.

A video spot for Biomen shampoo in 2012 featured Adolf Hitler purportedly deriding effeminate care products, and the strapline, “Here it is, a real men’s shampoo.” The ad was taken off the air after a storm of public outrage.