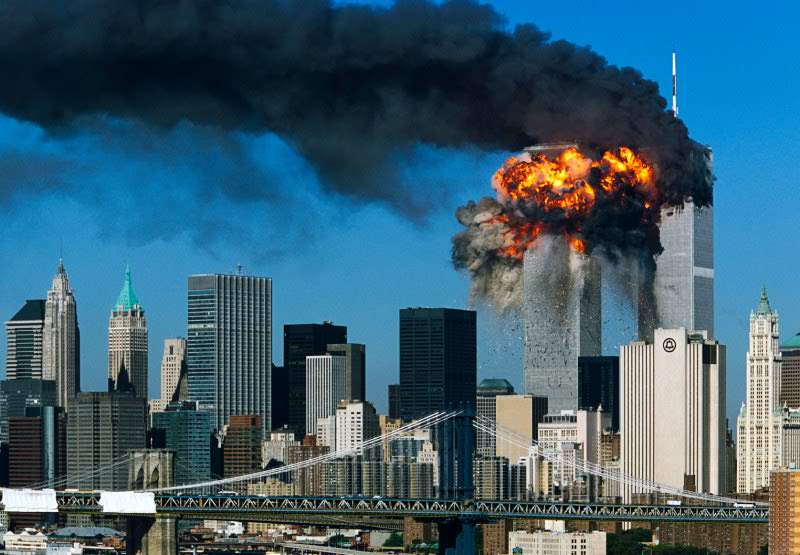 Self proclaimed the “9/11 Truth Movement,” various groups and individuals have been propagating several different conspiracy theories regarding the September 11 terrorist attacks on the World Trade Center (pictured above).

One such theory claims that the attack was a false-flag operation carried out by the U.S. government in conjunction with other world leaders.

The 2007 documentaryZeitgeist, the Movie by Peter Joseph contains a section, entitled All the World’s a Stage, devoted to unraveling the commonly-accepted account of what happened on 9/11.

Alleging that the Bush Administration knew of the planned attacks before they occurred, the film claims that the attacks were deliberately executed to justify the United States’ war on terror and obscure its real goals of economic gain and increased control over the population.

Supporters of a controlled-demolition theory argue that only the detonation of planted explosives, not the impact of aircraft, could have resulted in a complete collapse of the Twin Towers.

Another theory, brought forth by Morgan Reynolds, who served as an economist for the Department of Labor during Bush’s time in office, suggests that no planes were involved in the attacks at all and that video footage of the attacks was doctored.

This theory is widely rejected even by 9/11 conspiracy theorists, although David Shayler, a journalist and former member of the British security service MI5, supports Reynolds’ stance, stating that the airplanes seen on the video were actually missiles surrounded by holograms.

These, and other similar versions of the events of September 11, 2001, are dismissed as unsubstantiated by the government, engineering organizations, and the National Institute of Standards and Technology (NIST), but a thriving Internet community devoted to conspiracy theories continues to keep the faith.