This Is Not How Muslims Pray! '911: Lone Star' Wrongly Depicts Namaz In A Scene

Islam is one of the most misunderstood religions across the world. Similarly, the practices of Islam also get misinterpreted especially by the west. Recently, the makers of the famous television series, 911LoneStar did an unpardonable mistake in the series. The director showed a girl offering prayer, which she offers absolutely wrong.

When you make an effort to include a Muslim character but can’t be bothered to research how Muslims pray. Accurate representation matters ⁦⁩ ⁦@911LoneStar⁩ 🤦🏽‍♀️ pic.twitter.com/MjVEmB572r

In the viral video, the girl is offering a prayer without placing her hand on the chest. Most importantly, the girl is half bowed while praying with her hands on her knees. Well, this is not an act of ‘Namaz’ and it is wrong. 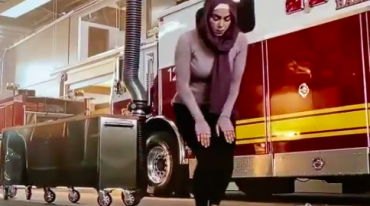 The sad thing is such a famous series with millions of followers saw something on the name of Islam, which is not Islamic. Besides, how negligent is the director who does not even know how the people of the second-largest religion offer namaz?

On the other hand, people on social media blatantly bashed the director for his blunder.

Fainting? Stretching? or what?

Is she fainting? Stretching? Getting ready to do a somersault? This is mad awk.

‘Not praying. It looks so uncomfortable’

Not praying. It looks so uncomfortable 🥵 A simple Google search could have fixed this, but because this is made for a white, non-Muslim haze I guess accuracy is unimportant.

They do this purposely. Your thoughts?

They do this purposely – and it has always been the case. It is similar to the dehumanizing project employed by the imperialists who would purposely mispronounce names and misrepresent beliefs. In most, if not all, western films they show wrongly performed prayers/adhan etc.

If it were a Muslim show and a Church scene???

The quoted replies are killing me. I’m just wondering tho, what would be the reactions if a Muslim produced a tv show where they show people praying in a church and doing the sign of the cross upside down. Would you find it acceptable @911LoneStar ??? 🤔

Catholic here. Movies and tv get catholic stuff wrong ALL THE TIME. Get used to it! If they include you, lots of it will be wrong. And don’t start asking nurses or doctors about what’s wrong on medical shows. Vast amounts of things are wrong on tv and in movies.

Namaz is the most cardinal aspect of Islam. Namaz has various advantages and benefits and it is one of the five pillars of Islam. How lame of the director of 911LoneStar, who did not even google the way of offering prayer. Many are saying it is purposely if it was then they did wrong to their series, not to the Muslims.

What do you think of the government’s decision? Tell us in the comments section below!

Ertuğrul: Here’s What You Need To Know About The Famous Turkish Drama Series
‘Don’t Mess With Chai’ Clap Backs The World Over This Gross Chai Making Video!
To Top