Panama Papers: 6 Things You Need to Know About the 'Biggest Leak in History' 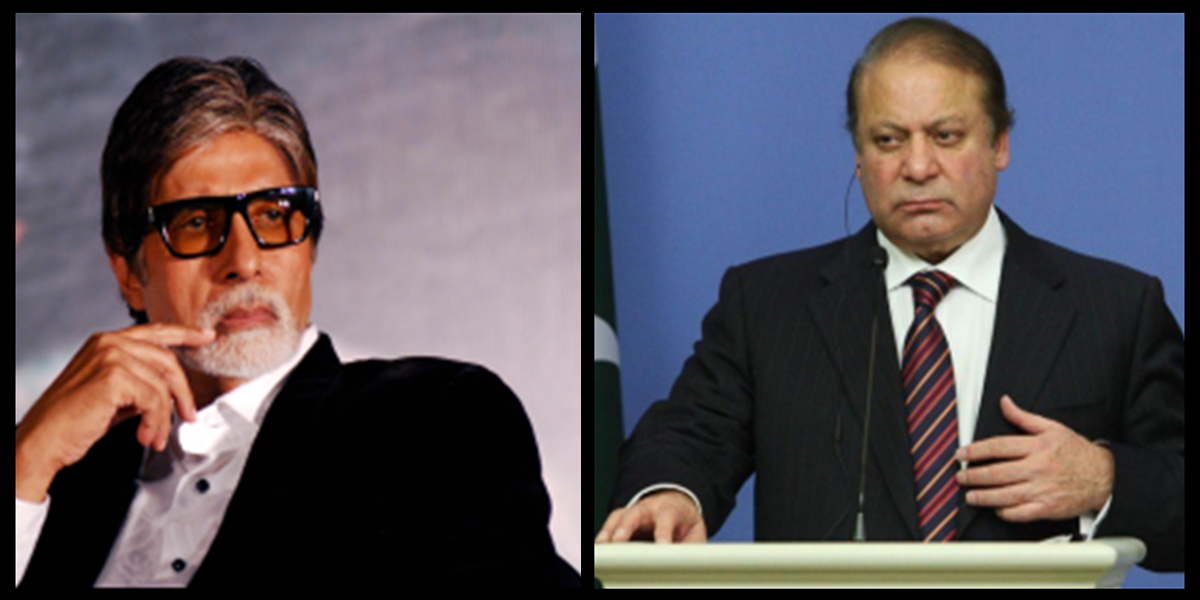 The German paper Süddeutsche Zeitung just released the biggest leak in the history of journalism, releasing 2.6 terabytes of documents  from a Panamanian law firm, Mossack Fonseca. The firm was in charge of selling anonymous offshore companies around the world, enabling the owners of the accounts to cover up their business dealings – no matter how corrupt they are.

An anonymous source called in and submitted the documents, and asked for no monetary compensation or otherwise, apart from a few security measures.

The documents released on Monday had been followed by a 12-month investigation by the media groups led by the International Consortium of Investigative Journalists (ICIJ) in Washington.

1. The Panama Papers have more documents than the combined total of the Wikileaks Cablegate, Offshore Leaks, Lux Leaks, and Swiss Leaks.

Data was so huge (11.5 million documents), it would take 36 years to examine if done by one journalist. #PanamaLeaks

The data from the leak is mostly e-mails, pdf files, photo files, and excerpts of the Panama law firm’s internal database. It covers 40 years, from 1977-2016. Around 400 journalists from over a 100 media organizations from more than 80 countries in the past 12 months took part in researching the documents.

2. The Panama Leaks has given details of at least 33 people and companies blacklisted by U.S., including Mexican drug lords and terrorist organizations. 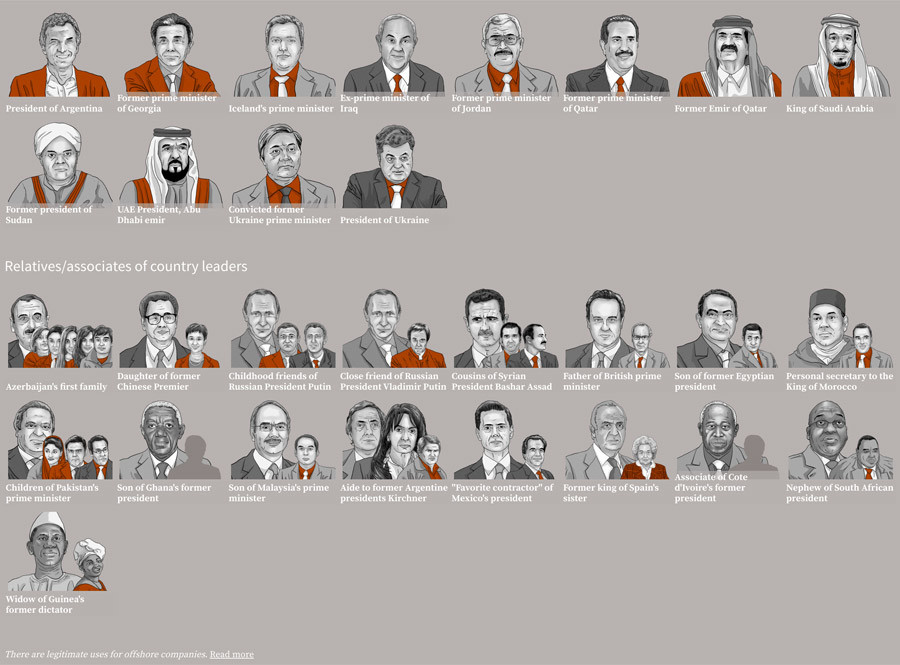 The authoritarians in the documents include former Hosni Mubarak, Muammar Gaddafi and Bashar al-Assad. The leak also gave information regarding Bhutto and her partners paying huge bribes to then Iraqi government -led by President Saddam Hussain- in 2000 to gain oil contracts for their company Petrofine FZC based in Sharjah, and later established a company named Petroline International Incorporation.

3. The Papers implicate 12 current and former heads of state including our own Prime Minister

Ref Nawaz Sharif family, details regarding finance mentioned relate to mortgage amount of £7m from Swiss bank and £5.5m for buying a company 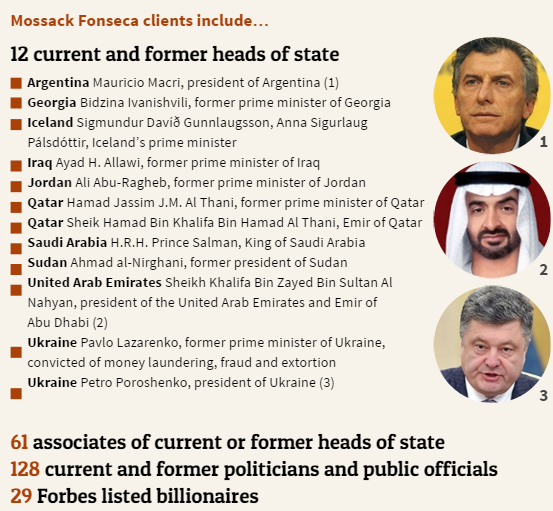 4. 8% of the world’s financial wealth have been confirmed as assets of the firm by Panama papers 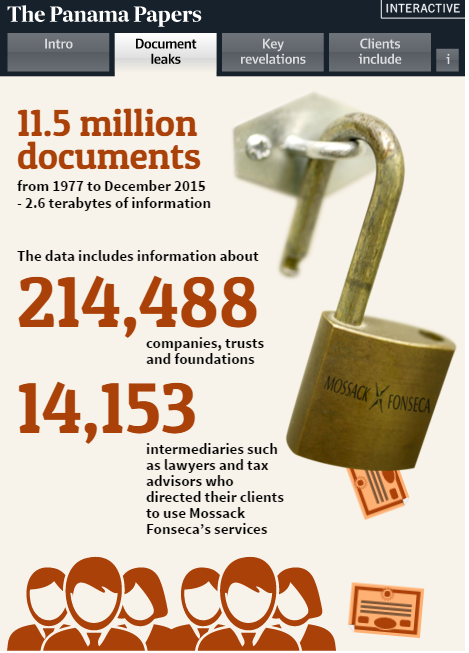 The offshore wealth has been estimated to be around $7.6 trillion, and that it has surged around 25% over the past 5 years. They show how the company has helped clients dodge sanctions, launder money and evade tax.

5. Included on the list of clients for firm are; Amitabh Bachan and aishwariya rai

Celebrity Jackie chan  and football star Lionel Messi, who ranked fourth on Forbes’ 2015 list of highest paid athletes, are also on the clientele list. It is not necessary that they will be charged with corruption charges as they may possibly have used off shore accounts for privacy, but it is likely they could face them. The international football’s governing body, FIFA, has members who have also appeared in the documents.

6. The Panama leaks showed the victims who suffered from the money laundering as well

Mossack Fonesca has since, given a response to ICIJ’s report saying that as a registered agent, they were merely helping their clients with thorough due-diligence, “one that in every case meets and quite often exceeds all relevant local rules, regulations, and standards to which we and others are bound.” 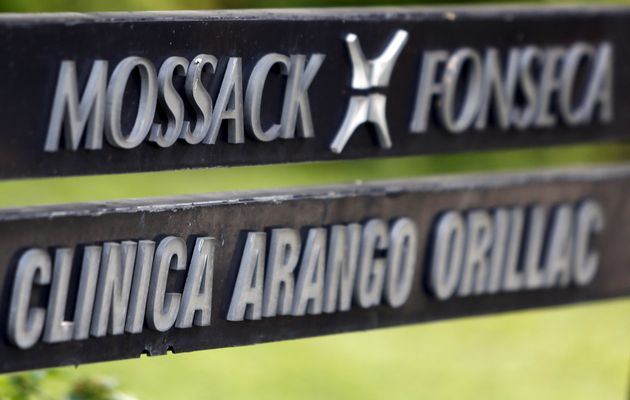 The leak of the Panama Papers is incredibly important not just because of the specific information they contain, but more so because they highlight and place public pressure on authority agents to take steps.

The story behind the #PanamaPapers? Courage is contagious. https://t.co/P6nYOebdKu pic.twitter.com/zrT2J0PtIa

10 Cruel Issues Pakistan Had To Face Right After Independence In 1947
Here’s What (The) “Scream” Is All About!
To Top