5 Things All Desi Female Medical Students Are Tired Of Hearing

It is tough as it is to be a medical student in Pakistan. But it makes it 098328509 times tougher when you have to hear the following, every day for the rest of your lives.

These are the few things that people should stop saying to female medical students:

Doesn’t matter which specialty you’re interested in. If you’re a girl, you belong in gynecology. Because let’s face it, what else would you do? It’s not like you’re made for anything else or you have the capacity to take on other challenges. And, what is it that you are talking about following your dream? Forget it!

It’s awesome that you have worked so hard all your life to get into medical school, and then even more to get out of it. The endless pharmacological classifications and side effects aside. Who cares about the confusing pathophysiology of various diseases and their histology? Nothing matters if you don’t know how to make the perfectly shaped roti for you husband to be.

It’s okay if you are a negligent stay at home mom, as long as you are staying at home. But God forbid if you are out there in the world trying to rid people of their health problems. People will find all the reasons to pull you down and show you where your professional life might be causing a problem in your familial life. Even when they know nothing about you or your life.

Of course it is going to be tough. No body said it would be easy. But every female working doctor has found ways to balance both aspects of their life and so will you! Farkhunda aunty’s neighbor doesn’t have the right to interfere in your issues! 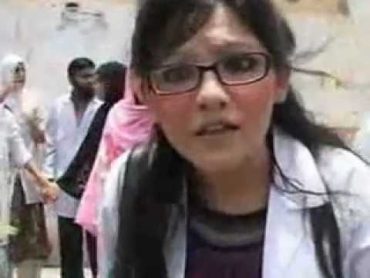 This is something that many male doctors and medical students are heard saying around the entirety of your medical school campus. This one is for them: please focus on your life and try to untangle your insecurities and figure out your path for the future. Do not waste your energy dictating what other people should or shouldn’t be doing.

The most common criticism that is heard against female medical student is that they don’t work after they get married. Even though that is statistically the truth, brushing over the root cause of this problem is a huge disservice to the argument.

It is the consequence of all those Shumaila aunties who look for a doctor bahu for their sons but don’t want their doctor bahus to work as doctors. (WUT?!)

And then, the same Shumaila aunty meets other women and nods her head in agreement that female medical students waste merit seats.

We all hate you Shumaila aunty!

What are some of the most annoying things you’ve heard people say? Let us know!

Nawaz Sharif Perfectly Told The World That Peace with India is Linked to Resolution of Kashmir
This Indian Journalist Wrote A Hateful Letter To Fawad Khan And Wants Him To Leave India!
To Top