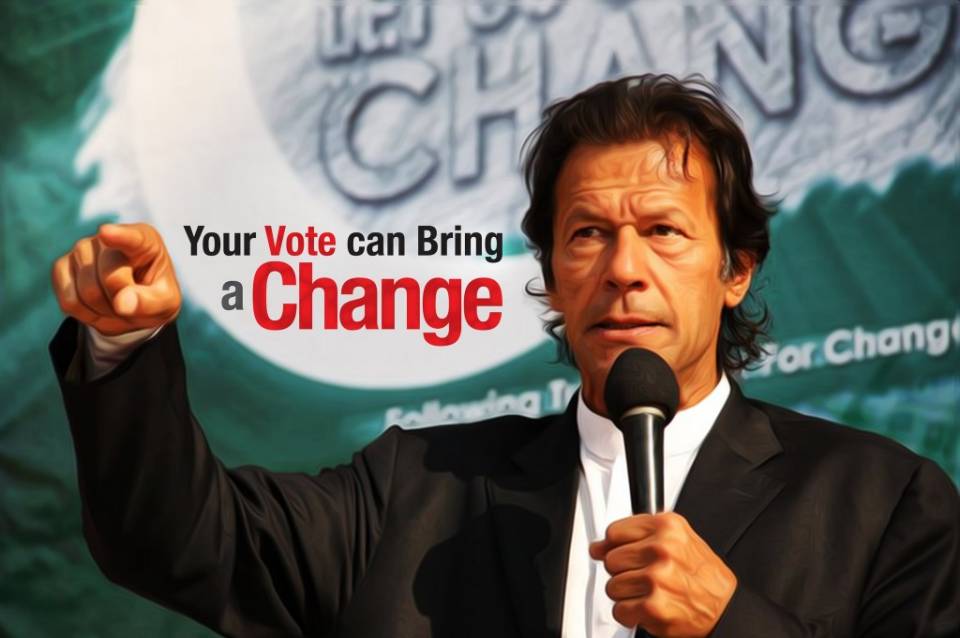 One could hardly disagree that IKâ€™s popularity has amplified a lot over the years. This dharna-thing has made him the most in-thing these days to be followed and talked about in friends and family. His elitist Youth Army, often called as â€˜burger armyâ€™ by PTI haters, loves him more than anything else these days. His urban followers want him to be next PM of country, and that will be the end of their struggle for revolution. Well, I wish kudos to them and to their leader on their aspirations. But, if you ask them the reasons why they want Imran to be next PM, you will find more of hilarious answers and less of rational.

I would like to quote few of comical yet distressing reasons witnessed by my own ears and in general, why IK supporters want him to be next PM.

This is a hilarious and sad one at same time. I often hear that he won us a world cup, so he will make a great PM of country as well. They argue that his leadership skills were witnessed when he saved the sinking Pakistani cricket team and went on to win the cup in the finals.

I just want to ask how you can give the power to rule a nation of 180 million people on pretext that he led a group of 10 people successfully to win a trophy. I mean if thatâ€™s the way to predict someone potential to beÂ  PM then trust me then any ofÂ  the CEOâ€™s of banks or multinationals in Pakistan would be a better PM than IK. The reason being they lead thousands of employees successfully taking care of them, the profits, and over all company. So, please, for God sake, think before giving this stupid reason to support IK. He has much better things to garner support from rather than from this argument.

I have an utmost respect and appreciation for Imran Khan for the great philanthropic work done by him. Shaukat Khanum Hospital is the biggest achievement of IK and the best gift given by him to Pakistani people. There stands no doubt on that.

However, making his success in philanthropic work as a basis to project him as a successful politician is an absurd thought. If that was the case, Mr. Abdul Sattar Edhi would get my vote for PM, after all manâ€™s work for good of humanity and charity has no parallels in sub continent let alone in Pakistan. Just give it a thought, by bringing his philanthropic work to promote his political aspirations, one debases and disgraces the credibility of his humanitarian work. Have we forgotten the corruption and mismanagement allegations put on administration of shaukat khanumÂ  few years ago that slowed down the donation to hospital? So be wise and donâ€™t humiliate your leader by using this pretext

Well, it may be true. But is it about him only? Isnâ€™t it more about the party? I mean politics is all about getting the right kind of people as part of your team and itâ€™s the party members who have to be elected rather than a single person.

Point is, he may be honest and angel-like but people around him are mostly tried and tested in dirty politics ground of Pakistan. Moreover, change doesnâ€™t come from top; it comes by empowering people at bottom and making institutions strong enough to act as bulwark against corruption. Just think for a moment, why would traffic policeman stop taking bribe once IK becomes PM, will he be afraid that angel IK is watching him committing a sin? After all, a common man like you and me are most affected by corruption at ground level. So, this reason of supporting him is bizarre.

Oh really? Will he solve the issue of baloch persecution instantly? What does he have to say about, let alone solve, the water crisis in country? What about target killings and law and order situation in Karachi? How about ties with U.S.? How will he deal off with IMF, as he can bash them as he does other elements within country?

Trust me he doesnâ€™t have â€˜Aladin ka chiraghâ€™ to sort things out immediately. Worse, he doesnâ€™t have any plans about how to go through problems that really matter. If he does then why donâ€™t we have answers to above questions? His magic wand is magic less, if we suppose he has one in first place.

Yeah! This totally depicts the mindset by which Pakistan has been ruled since its birth. And, look where we stand now as a consequence. We have still not learnt that this is a bloody whole country we are talking about. This canâ€™t be run on trial and error basis. It needs policies, opinions, and manifestos, backed by solid evidence of their working out capacity, from its leaders to be given an opportunity to rule. If this canâ€™t be understood by well-educated citizens mainly living in elite urban areas, how can you expect it to be understood by common people?

For example, IK said they will explore and pump out shale gas once they come in power. Did his supporters ask how will he be able to finance expensive process to mine out gas, or from which place will he explore. All we heard was shinny idea but no pragmatism behind it. As they often say â€˜empty vessels make most noises.â€™ But, are his well-off supporters empty vessels or just ignorant?

Lahore Lions, you missed by an inch but, you can still do it!
Lastest News: Loud explosion in DHA Karachi
To Top