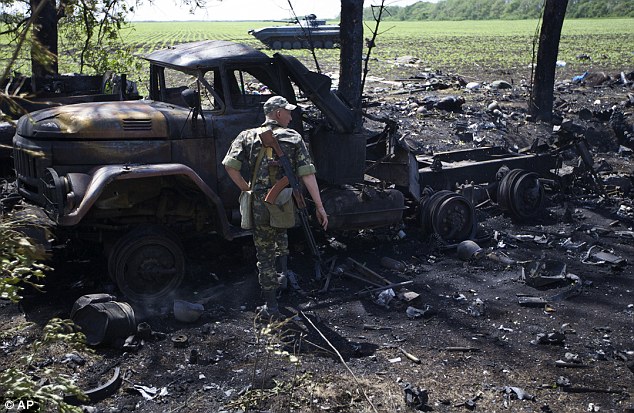 At least five rebels are dead after hundreds of pro-Russian forces stormed a camp of border guards in the eastern Ukraine city of Luhansk Monday, in their latest attempt to seize weapons and ammunition from Ukrainian forces.

About 100 insurgents initially attacked the camp, drawing fire from border guards. Â A few hours later, hundreds more rebels joined the battle. Â Reports had varying numbers of rebels involvedâ€”from 200 to as many as 400. Ukrainian forces sent an airplane to the area to help bolster the border guards, but fighting continued when air support left the scene.

A spokesman for the Ukrainian border guards said that five insurgents were killed and eight more were injured. At least three Ukrainian servicemen were injured in the gunfight, three seriously, spokesman Serhiy Astakhov told the Associated Press.

Rebels in uniform near the Luhansk base promised safety for the border officers if they surrendered and laid down their weapons. The rebels– who have seized government and police buildings across east Ukraine for weeks– have waged increasingly aggressive attacks on government-held checkpoints in an attempt to seize guns and ammunition from Ukrainian forces.

One fighter in uniform, identified by the AP as Vlad Sevastopolsky, said pro-Russian militants have surrounded the base but offered Ukrainian troops a safe corridor out, as long as they surrender their weapons. Sevastopolsky is from a rebel group based in the town of Antratsyt, another town in the Luhansk region.

Border guards lamented that neither the army nor the police had arrived with reinforcements yet.

Reuters reportedÂ that a group of separatists were shooting into the border post from the upper floors of a nearby apartment building. Another statement claimed that separatists had occupied private apartments, making it difficult for servicemen to return fire.

Vladislav Seleznyov, spokesman for Ukraineâ€™s anti-terrorist center, told Fox News Monday that the attack was still ongoing. He told the AP the base was an important coordinating node for border guards across the province, and said the attack may have been an attempt to disrupt communications.

Seleznyov also said there was another rebel attack Monday on a government checkpoint in Slovyansk, a city in the Donetsk region that has been an epicenter of the pro-Russian movement. He said rebels had mined a number of power plants in Slovyansk, which he claimed would be detonated if the government were to move on the city.

For weeks, Russian-speaking eastern Ukraine has been the scene of deadly clashes between government troops and pro-Russian insurgents.

Three months of protests during the winter drove pro-Russia president Viktor Yanukovych to flee the country. Many in Ukraine’s east are suspicious of the new pro-Western government in Kiev.

Protesters in the east were rallying in early spring in favor of greater independence from the Ukrainian capital but that soon turned into a separatist movement as the Luhansk and the Donetsk regions declared independence following hastily called referenda.

The conflict between Ukrainian government forces and pro-Russian insurgents in eastern Ukraine escalated markedly in the last week, with rebels attempting to seize a major airport and the shooting down of a Ukrainian military helicopter.

In Moscow, the Russian defense ministry announced on Monday a military exercise involving the launch of high-precision missiles. The ministry said the maneuvers of the Western Military District will continue through Thursday and will involve the deployment of Iskander surface-to-surface missiles.

Moscow didn’t specify the areas where the exercise will be held and made no mention of the situation in Ukraine.