A 29-Year-Old Indian Man Claims to be the Long-Lost Son of Indian Actress Aishwarya Rai! 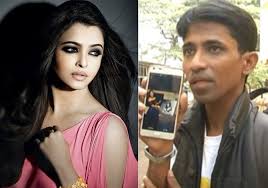 This isn’t the first time someone from India has claimed his or her association with a Bollywood star – a few years ago, an Indian woman claimed to be Shah Rukh Khan’s mother. While stories like these often prevail in India, everyone knows they are bogus.

However, claims of Sangeeth Kumar caught everyone’s attention. The young boy from Andhra Pradesh claims that he is Aishwarya’s son who was born through an IVF. What’s even more surprising is how the individual believes that until the age of 2, he was raised by Rai’s parents. He was later taken to Chodavaram.

“I was born to her by IVF in London in 1988. I was brought up in Chodavaram from age three to 27. I was with my grandmother Brinda Krishnaraj Rai’s family at the age of one and two in Mumbai. My grandfather Krishnaraj Rai died in April 2017 (March), and my uncle’s name in Aditya Rai.”

As per the alleged claims, it concludes that Rai would’ve been a mother when she was 15 years old. Without any proof or documents, the man continued making claims and stated how he now only wants to be with his mom.

“Most of my relatives have manipulated things since childhood, otherwise, I would have come back to my mother before itself with clear information. Due to lack of information, I could not come to my mother, so now I got all clarity. The ultimate thing is I want my mom,” as reported by Time of Now, India.

Sangeeth claims that he only wants to be with his mother now.

“My mother got married in 2007 with Abhishek Bachchan and she is separated, living alone. I want my mom to come and live with me in Mangaluru. It’s already 27 years since I separated from my family, I miss her a lot. I don’t want to go to Vishakapatnam, at least I want my mother’s number so that I’ll be free.”

Well, so what do you think? Does this story become 2018’s first WTF moments?