20 questions on Every Pakistani's Mind After The Peshawar Attack 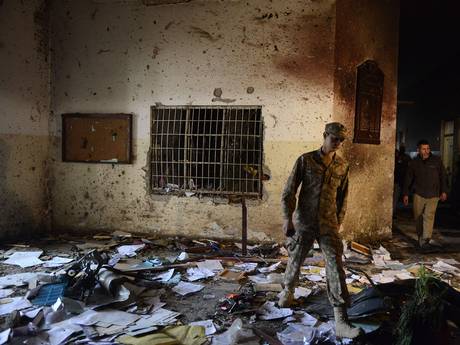 No one wants this to happen ever again.

With this in mind, I thought I’d pose a few questions which no one seems to be asking, but we all should be asking — over and over again — from ourselves, from the politicians, from the media, and from the military. We don’t need answers to them just yet. And, it’s not like people would agree with all my answers. It’s not like I have all the answers either.

But let us ask the questions:

3) Where do they receive the indoctrination that makes them believe that killing children is justified? Which institutions are involved in this indoctrination? Why are these people chosen in particular?

4) If our intelligence is capable of intercepting calls, receiving messages from the Taliban (claiming responsibility), and receiving photos of the men who did this, why don’t we question how these communications are possible without providing a lead to finding these people?

5) Why have we not demanded more transparency from our agencies, given the spectacular intelligence failure that this turned out to be?

6) If bombing the Taliban has not resulted in fewer attacks, why do we keep calling for more bombing?

7) Why have we not asked the military to allow media access to Waziristan? Why do we trust everything we are told about Zarb-e-Azb?

8) Most of the men who are the perpetrators of these massacres believe they are going to heaven when they die. Will the death penalty instill any fear in them at all? If they are willing to kill themselves, does being killed by others seem a credible deterrent?

9) Is there a link between the killings of Ahmedis, Hazaras, Christians, Shias, shrine-attendees and the massacre that took place? Is there a common ideology at hand here?

10) Is there a reason that we condemn some of these attacks and not others? Is that why the blame lies on us?

11) Is there a link between the rise of the TTP and the impunity with which groups like Lashkar-e-Jhangvi operate?

12) Why is it that so many of those arrested in terrorist attacks are released soon after?

13) Would having stronger witness programmes, more efficient courts and a corruption-free police system help prevent these men from getting out of jail within days?

14) Should we start thinking about how, if we were not taught to hate Hindus, Shias, and anyone who is not our brand of religion, this attack may not have been a chilling, logical conclusion to a string of such attacks. How can we change the way our schools teach?

15) What are we really trying to achieve when we say these attacks were not carried out by Pakistanis?

16) What are we really trying not to think when we say these attacks were not carried out by Muslims?

17) Is there nothing to be considered between bombing and negotiations?

18) Would bringing schools, water, electricity, roads, and basic respect to the tribal areas be an effective weapon against these terrorists?

19) Would the military changing its policy regarding ‘strategic assets’ make these terrorists lose their awful potency?

20) Is it possible to critique our military and government’s policies regarding the Taliban, even while feeling immense pain for their dead children?

These are some of my questions. If for no other reason than that we cannot see any answers in this dark, depressing time, ask these of yourselves, your military, your government and your media.

What is at stake you ask? What’s the point?

The point is 145 dead people. The stakes are possibly infinite more.

Read More: How Did The Peshawar Attack Change The Way We Think?

What Lessons Muslims Can Learn From Jesus Christ’s Life
WhatsApp To Launch Voice Calls; With The Amazing Voice Call Features, Facebook is All Set To Kill Market Of Skype!
To Top