As a society, we are quick to isolate anyone who is different. The mentally and/or physically challenged members of our society often receive sympathy and pity, something they don’t need. Time and again, there have been isolated discussions and efforts to consider the challenged as productive members of the society and give them the opportunity to contribute to the country in their own unique way.

Earlier this year, Ali Hamza sang a song ‘aao hamaray saath chalo’ for Karachi Down Syndrome Program. The concept of the song revolved around the idea of inclusion of people affected by Down syndrome in the society. The message was endorsed by celebrities such as Ahsan Khan, Bushra Ansari, Sarwat Gilani, Momal Sheikh and others. 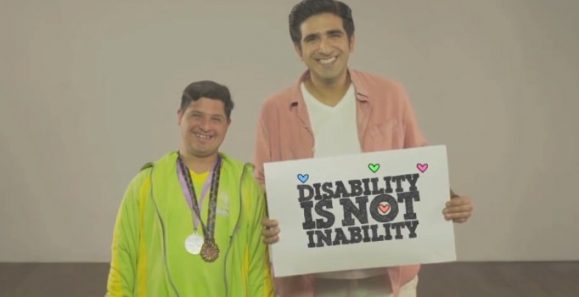 Meanwhile, KFC and Dolmen took an initiative to employ mentally or physically challenged and gave them the right to show their expertise.

The latest TVC of Blue Band takes the initiative to include in this discussion not just grown up members of the society but the ones who will help build this country in the future. The TVC shows a group of young boys practicing throw-ball so as to include their physically disabled friend.

We find the spirit of the ad both innocent and beautiful. We also find it a bold move by Blue Band to include the shapers and builders of tomorrow to the discussion and we can’t help but smile at what the kids, watching the ad, would feel because we got goosebumps when the boy was revealed to be physically disabled!

Most kids with intellectual and physical disabilities feel isolated in school and playgrounds and don’t get an opportunity to play with other kids. The thought that we are all different but equally capable should be inculcated in children early on and that’s exactly what Blue Band is trying to say. We need to move away from a culture of sympathy, a, d instead teach our kids to be more inclusive towards everyone who may look different. The tagline accompanying the ad is

What an amazing reminder for moms/dads/guardians to teach the idea of social inclusion by removing barriers and also to focus on character building of their children.

Parents are always trying to make the best choices for their kids and even when they do so, they’re always second-guessing themselves. Blue Band’s new TVC basically assures all parents that it is there, to take care of their child’s nutrition which most moms worry the most about, so they can relax a bit and focus on their ‘tarbiyat.’