With every passing day, humans are serving as the most dangerous creatures on this planet. Every day, a precious life mercilessly loses its soul on something petty and the culprits are not even questioned. A recent terrible incident happened in Karachi’s Bahadurabad area and as always the victim awaits justice while the culprits roam free.

A 15-year-old boy named Rehan from Lyari was brutally beaten to death by two residents of Bahadurabad. According to the police reports, two burglars entered a bungalow near Kokan ground, Bahadurabad. The guard managed to catch 15-year-old Rehan while his accomplice successfully escaped. After catching Rehan, the bungalow owner and his neighbor named Daniyal and Zubair tied Rehan’s hands to a grill, put his pants down, interrogated him asking about his other partner and brutally killed him.

Here’s the footage of the heart-wrenching incident!

minutes before death …#JUSTICE for Rehan …

Since the video was uploaded o the internet it has caught many eyes demanding justice for 15-year-old Rehan. The hashtag #JusticeForRehan is trending on Twitter as well and Pakistanis are urging the concerned authorities to bring the culprits to shame. Rehan’s father later claimed that his son worked as a butcher during Eid-ul-Azha and he went to collect his dues but never returned home.

You may like to read: Mufti Naeem, Among Others, Condemns Mashal Khan’s Murder And Labels Him A Martyr

According to the medical report, the boy’s body shows clear signs of torture. Even in the pictures, it is evident that he has been beaten mercilessly. Police took the bungalow owner Daniyal and his friend Zubair into custody and investigating it further.

These are the culprits; Daniyal and Zubair! 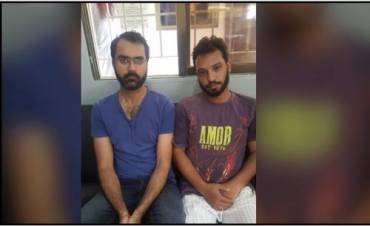 Waqar Zaka on the killing of 15-year-old Rehan!

Famous TV personality Waqar Zaka also jumped in the matter and after getting deep into it it was found that the concerned police has taken 3 lacs each from both Daniyal and Zubair and has freed them. It is also said that one of the culprits is a Canadian National and has fled the country. This just displays the rotten justice system of Pakistan and its caretakers.

#JusticeForRehan , after FIR the culprits are sleeping at home , WOW The criminals are not at Bahadrabad Police station let’s see if they are here at Farozabad ?

Read about: A 13-Year-Old Boy Was Killed During The Alleged Blasphemy Protests Against A Hindu In Balochistan!

The deceased boy wore a T-shirt saying “Apna Time Ayega” but he left the cruel world before he could witness that. Why do you think these inhuman incidents keep on happening. How can they be prevented? do you believe public lynching can help eliminate crimes?  Even if he was a burglar he should have been handed over to the police.

What are your thoughts on this? Please share your opinions with us.

What Does A Barber Pole Vector Indicate?
Malala Yousafzai’s Soft Stance On Indian Brutality In Kashmir Only Shows Her Hypocrisy!
To Top