A mother’s plea has been doing rounds on social media since yesterday in Pakistan. A video depicting 15-year-old Ahmed Raza’s mother from Islamabad has been shared over 21,000 times on Facebook.

The woman, late Ahmed Hassan’s mother, demands justice for her son’s alleged murder. Ahmed’s mother sheds light on how her son’s life was taken against his will. She put the blame on one of Ahmed’s friends and his father. 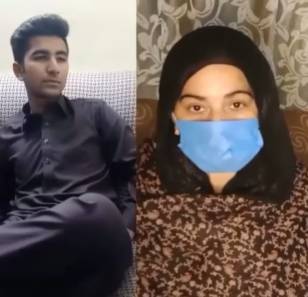 This is what Syed Ahmed Hassan’s mother had to say. “My son Syed Ahmed Hassan, a student of class 9, 15-year-old. He was killed by Ahmed Amin Khan and his father Aminuddin’s violence. He was forcibly taken from my home by the duo. My son was then drugged by them and his life was taken.”

She continued: “I did not know where my son was. They kept him with them, dead, for about 8 hours till they planned their escape. His body was kept at their home. They faked his death as one from coronavirus to try and keep themselves safe. They wanted me to not see my child, putting the blame of his death on coronavirus. So we wouldn’t know what happened to him.”

Ahmed Hassan’s mother further shed light on the alleged murderer’s whereabouts. She said they lived in G-13 Islamabad and owned a travel company by the name of Falcon Express. She further stated that the father-son duo was rich and influential, which is why they were not afraid.

This is why Ahmed’s mother had to resort to social media and seek the public’s help, much like the case of Shahzeb Khan and others killed wrongly. Ahmed’s mother then stated how Ahmed Amin Khan and his father were throwing money to try and save themselves. She stated that they were trying to buy justice because they know they had wronged her son.

Ahmed’s mother then requested the public to share the video far and wide so her son could get justice. #JusticeForAhmedHassan