15 Hilarious Pakistani Tweeps You Should Definitely Follow To Fill Your Timeline With Never Ending Jokes! 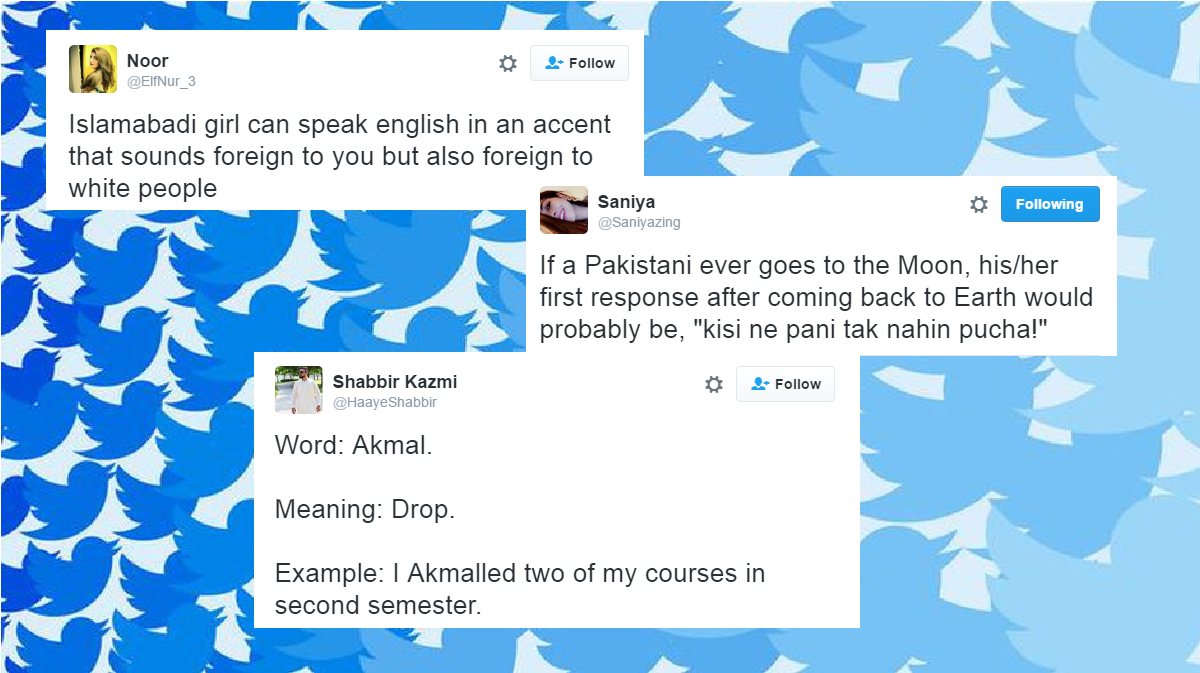 Pakistani people are blessed with a lot of things and humor is one of them. This post is about funny, sarcastic, and hilarious Twitter people who bless your timelines and Facebook feeds with their amazing humor. And they are those who you should definitely follow. Below is the list of some of the best Pakistani Twitter users. (in no specific order)

Qasim Zaidi, you should follow him for his puns. His brilliant creativity and talent to make a pun/joke out of everything and anything at all.

The favourite NFAK song of atheists?

Probably one of the funniest guys on Twitter. You must follow him if you are having a bad day and need a good laugh.

An English professor married an Urdu teacher. They had a بb after 9 months.

Example: I Akmalled two of my courses in second semester.

Must stop laughing so much.

When the driver asks you to check if the tyre is punctured pic.twitter.com/9h2hxRLtDg

This man will keep you entertained with his tweets during a cricket or a football match with his hilarious spontaneous jokes.

He will tweet videos that’ll making you laugh out loud. He recreated the Karachi Snapchat Story and if this thread doesn’t make your day, nothing will.

If a Pakistani ever goes to the Moon, his/her first response after coming back to Earth would probably be, "kisi ne pani tak nahin pucha!"

Genuinely funny. His NFAK jokes thread is greatest of all.

When you get blamed for something your sibling did. pic.twitter.com/oFxMmwBLWQ

When she is not busy being funny, she is busy being the talented artist she is.

You’ll regret not following this guy.

His bio says rarely funny mostly offensive. But it’s the other way round.

Indians have made foolproof plan to defeat Pakistan. They will release Phantom 2 and kill us all with Saif Ali Khan's over acting

If you think you haven’t made any good decision lately, follow him.

Hypocrisy is like bad breath, you can only tolerate your own.

Okay jokes apart India, We did not attack you. No matter how much we train our 'terrorists', no Pakistani can wake up on a sunday before 3pm

Mad photoshopping skills to give you the best memes on the internet that make it to 9GAG as well. Who do you think gave you this Amir Liaqat meme?

Twitter will always be thankful to me for giving this meme pic.twitter.com/iz1KBiB46p

General Raheel Sharif said “Give me a wifi device and 10 Azmar Khan Khattaks, and I’ll win you the war against India”. Azmar, sometimes offensive but mostly very offensive. If you want to see him roast Indians and Bangladeshis and Afghanis, follow him.

Last but not the least. One of the most hilarious tweeps you will see on Pakistani twitter.