Qudratullah Khan, the 13-year-old son of Bismillah Khan was caught in the ambush caused by the mob in Lasbela, which was trying to get custody of the Hindu man jailed after locals accused him of blasphemy.

During all the fiasco which took place yesterday, the 13-year-old, resident of Pathan Colony lost his life. The innocent child was first brutally injured due to the aerial firing and eventually lost his life as he couldn’t fight the sustained injuries. Alongside the child, the rescue Edhi workers, police officials, Assistant Deputy Commissioner Tariq Mengal and SP Lasbela Jan Muhammad Khosa were also injured.

It all started when the 35-year-old Hindu Prakash Kumar from Hub city of Lasbela district, Balochistan was arrested by the police on the charges of sharing blasphemous content via instant messaging application WhatsApp. SSP Lasbela Zia Mandokhel said, “The man was arrested after local people accused him of blasphemy.,”

While the officials are trying to investigate the issue, the protesters and a local mob continue enforcing their presence in the matter. Yesterday, a shutter-down strike in the Hub took place as the protesters and an enraged mob surrounded the police station while asking for the custody of the accused. 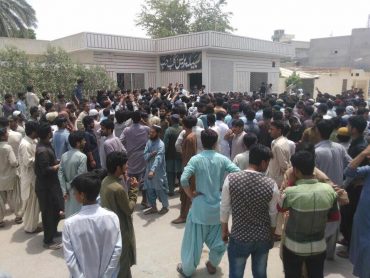 The mob girdled around the local police station and demanded to take control of the accused, as stated by SSP. The accused, however, had already been shifted to Gaddani Jail, but the mob did not believe and continued asking for the custody of Kumar and eventually started to shower stones at the police station.

As a result, the law enforcers had to make aerial fires and use tear gas to remove the mob off the premises. The police also took 20 protesters into their custody. As reported by SSP, the mob came from Karachi, due to which the traffic remained to block the entire day. The businesses were also closed for the entire day and no working activity took place.


The SSP while explaining the matters further added, “The situation is expected to remain under control as all religious parties have condemned such riots.”

This Astounding Self-made Egyptian Artist Reproduced 700 Meters Long Holy Quran For A Chance In Guinness
A Girl Stabbed Her Boyfriend For Eating Her Fries And This Story Has A Message For Everyone!
To Top