13 Killed in A Suicide Attack on Peshawar Imambargah - Parhlo 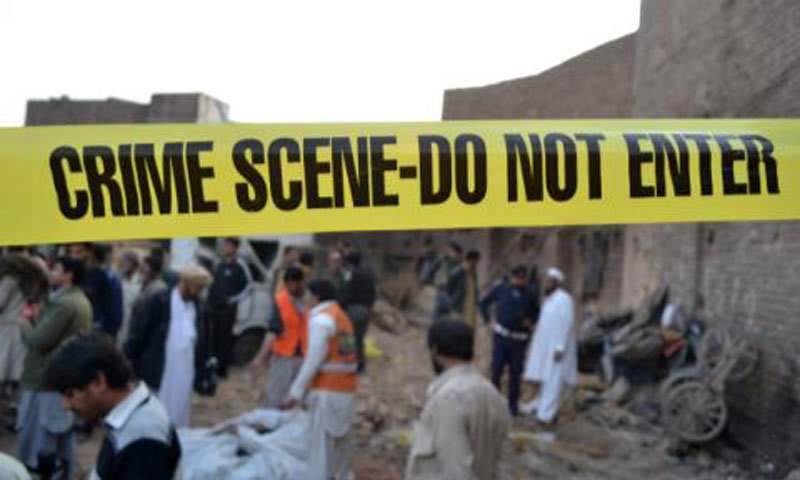 PESHAWAR: At least 13 people were killed and more than 50 injured in a gun and bomb attack in the Hayatabad area Friday when suicide attackers and gunmen entered an imambargah, police and hospital officials said Friday.

Heavy firing was also reported, where residents said a thick cloud of smoke had engulfed the Hayatabad’s phase V area. While residents said three explosions took place inside the Imamia Masjid Imambargah at the time of Friday prayers, police did not confirm the blast inside the Shia place of worship.

Security and rescue operation teams were dispatched to the area, with forces cordoning off the site for further inspection.

The attack comes two weeks after a suicide bombing at an imbargah in Shikarpur which killed 61 people, the deadliest sectarian incident to hit the country in nearly two years.

SSP operations Dr Mian Saeed confirmed that 13 people were killed and more than 50 wounded in the attack on the imambargah.

Eyewitnesses claim that three more attackers, in addition to the three suicide bombers, had entered the imambargah. They added the three men may have fled the place of worship after scaling the walls on the backside of the Shia mosque.

SSP operations Dr Mian Saeed said that three suicide bombers entered the mosque while only one was able to blow himself off. Another suicide bomber was killed by security forces while the third one was arrested in injured condition.

The suicide jackets of the suicide bombers are being diffused by bomb disposal squad.

Hospital sources say 8 people killed 56 wounded in attack on Peshawar imambargah. According to sources, families are flocking to the Hayatabad Medical Complex to look for their family members injured in the attack.

Hospital officials say due to the large number of injuries, a lack of space is being reported in the hospital.

Khyber Pakhtunkhwa Information Minister Mushtaq Ghani confirmed that one of the blast was carried out by a suicide bomber.

Security forces are conducting a search operation of the area to clear the area. Media personnel have also been instructed to steer clear of the area as it is yet to be cleared.

Footage shows rescue workers and police carrying injured worshippers out of the mosque precincts to ambulances.

An eyewitness told Dawn that Friday prayers were being offered at the mosque when five to six armed men wearing security forces’ uniform entered the place of worship and hurled grenades at the security personnel deputed at the premises.

He added that one of the attackers, who was wearing a suicide vest, blew himself up inside the imambargah when the worshippers tried to wrestle and snatch the weapons of the attackers. After the suicide blast the rest of the attackers began indiscriminate firing.

The eyewitness claimed to have seen more than two dozen injured after the attack began.

Another eyewitness claimed that 800 worshippers were present inside the imambargah at the time of attack.

Two weeks earlier on Friday, at least 60 people were killed and 60 others injured in an explosion inside a central imambargah in Sindh province’s Shikarpur district.

The militant organisation Jundullah, a splinter group of Tehreek-i-Taliban Pakistan (TTP), had claimed responsibility for the terrorist attack.

At the same time, Pakistani security forces are engaged in the North Waziristan and Khyber tribal regions — with the operation in Waziristan starting soon after a terrorist attack on Karachi’s Jinnah International Airport and the theater of war expanding into Khyber.

The blast on Peshawar’s imambargah comes as Pakistan is attempting to implement the National Action Plan to combat and root out terrorism from the country, an initiative that was set in motion after the Dec 16 attack on Peshawar’s Army Public School in December 2014.

Standing on Stool Will Not Make You Muhammad Irfan
Women in USA Drive Because They Don’t Care If They Are Raped: Saudi Historian
To Top