10 Blunders Of The Popular Harry Potter Series That Went Unnoticed

This article was originally submitted by Tooba Fayyaz.

Harry Potter is a well-known saga of all times based on 7 series of books and 8 films. It’s a story of an 11-year-old boy who lives with his aunt’s family; certainly not a lovey-dovey happy life, but a hard one serving their orders all his life, his life changes when Hagrid shows up one day and present His Hogwarts acceptance letter to him.

Later he came to know that he’s quite famous in all wizardry worlds while all he does in his life is wiping his aunt’s table, and the rest of the story shows his later wizardry life with all twists and turns. Well, regardless of how phenomenal this series is, here are some mistakes that not only happened in the first part but they actually happened throughout the saga.

Buckle up Potterheads we’re all set to catch these pretty eye-opening bloopers. 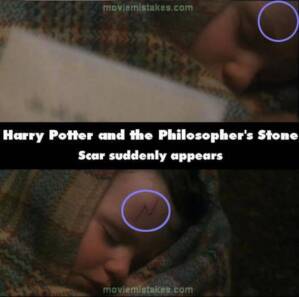 Wait, what? The whole story spins around how THE ONE WHO NOT BE NAMED(..since I never received my Hogwarts acceptance letter so I’m going to say his name loud VOLDEMORT!), gave Harry a scar and all, they forgot to actually make it? You actually are kidding me, right? 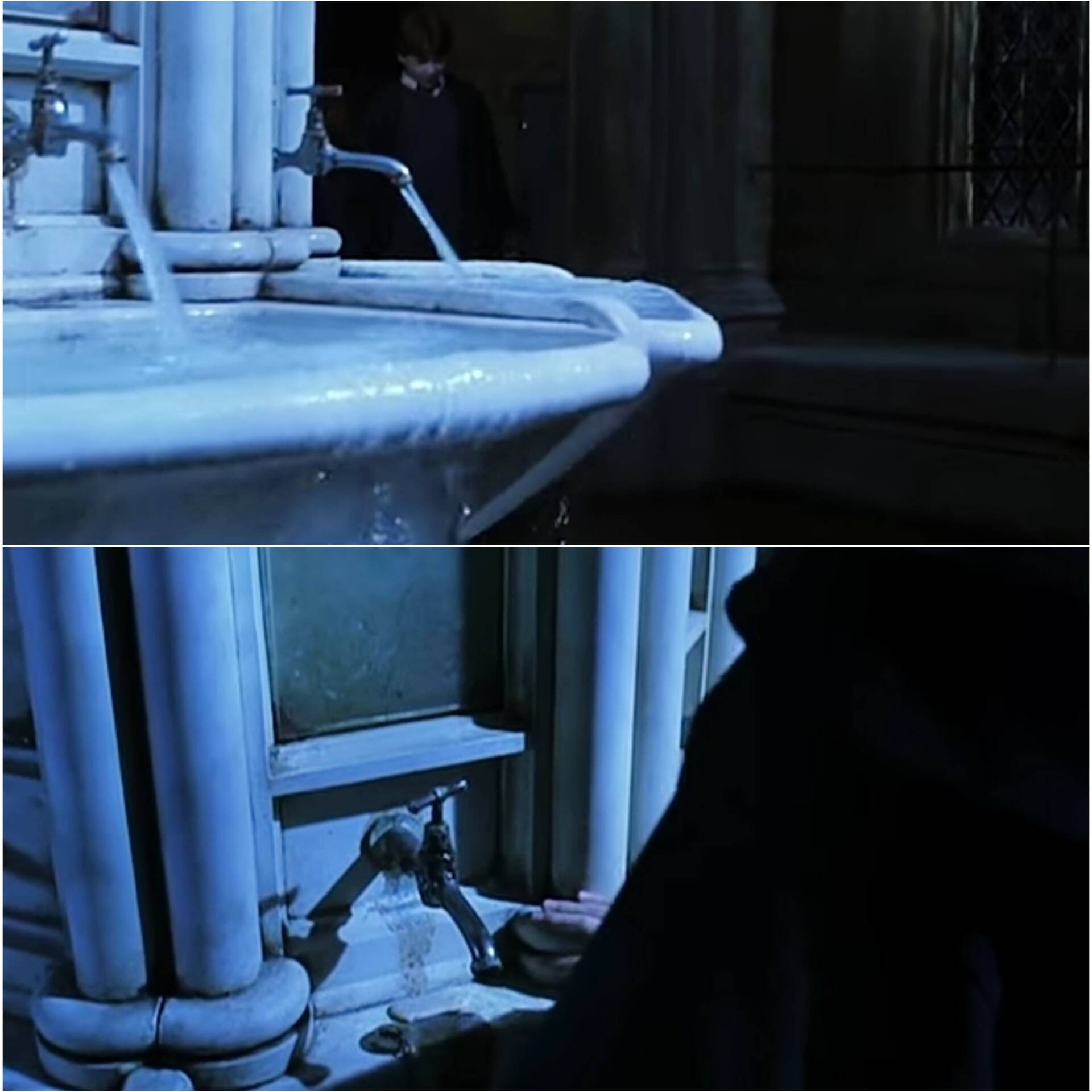 Source: Harry Potter and the Chamber of Secrets

Well if we think that the only secret in the Chamber of Secrets was the CHAMBER –  home of the monster Basilisk, we need to see this part again to witness Myrtle’s tricks closely. When Ginny Weasley tossed Riddle’s diary at Myrtle, she flooded the whole girl’s washroom by turning on all the taps. Later when Harry and Ron came to that exact washroom with Lockhart to find the chamber, Harry rotates the tap (before noticing the mark on the tap) and boom there was no hint of any water! 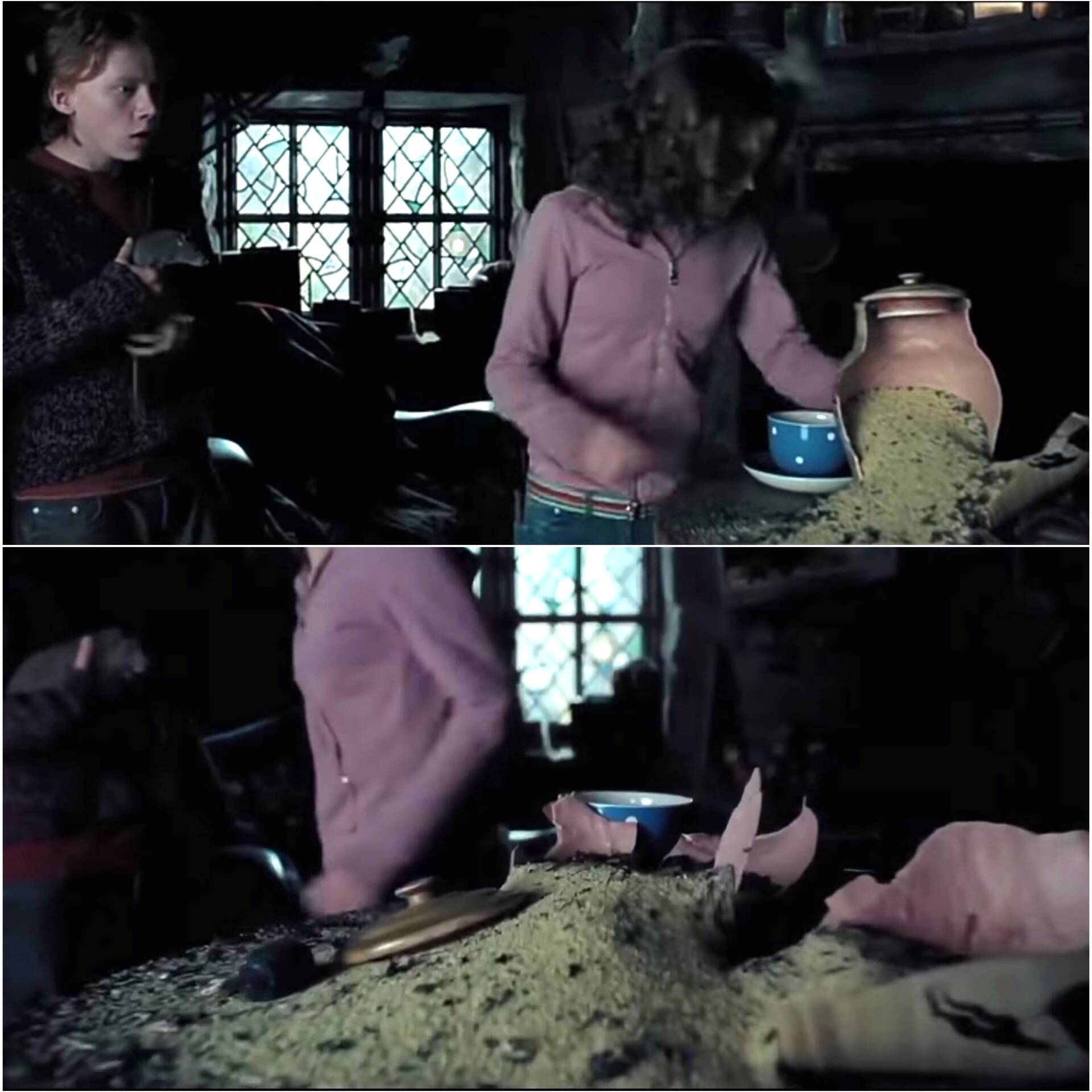 In Prisoner of Azkaban when the trio visits Hagrid before the slaughter time of Buckbeak, a flying rock hit the pot and it clearly breaks in half, but later when they mess up with time to save Sirius and Buckbeak, the flying rock hits the pot and guess what this time pot shattered into pieces, mysterious enough hmm? 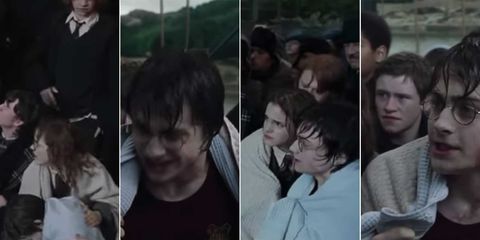 In Goblet of Fire after Triwizard Tournament’s second task which involves underwater driving, after Harry saves Ron and Fleur’s sister, he was all wet and cold (definitely), Hermione gave her towel to Harry to keep him warm (sweet of Hermione), but in a very next scene when Dumbledore came to see Harry the towel automatically shifts back to Hermione’s shoulder! Why you do this Hermione? 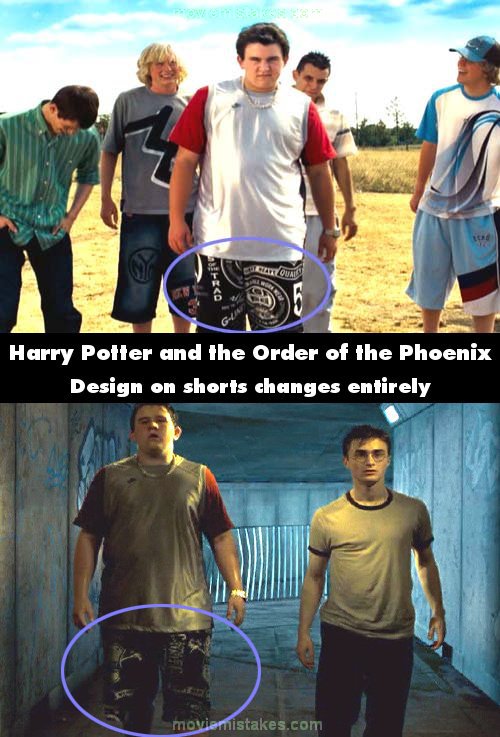 In Order of Phoenix when Dudley came along, his all-boys gang to bully Harry he was wearing a shirt with a number 5 on the left side of it. Then when the situation changes, it was all windy and dusty due to the Dementors attack, while walking through the tunnel the design of his shorts changes, from one funky black and white shorts to another black and white shorts, and in the very next scene when he falls on his back the first short (with the number 5) reappears. Dudley you filthy Muggle stop doing these tricks, you’re not a wizard!

6. Harry messing with our minds 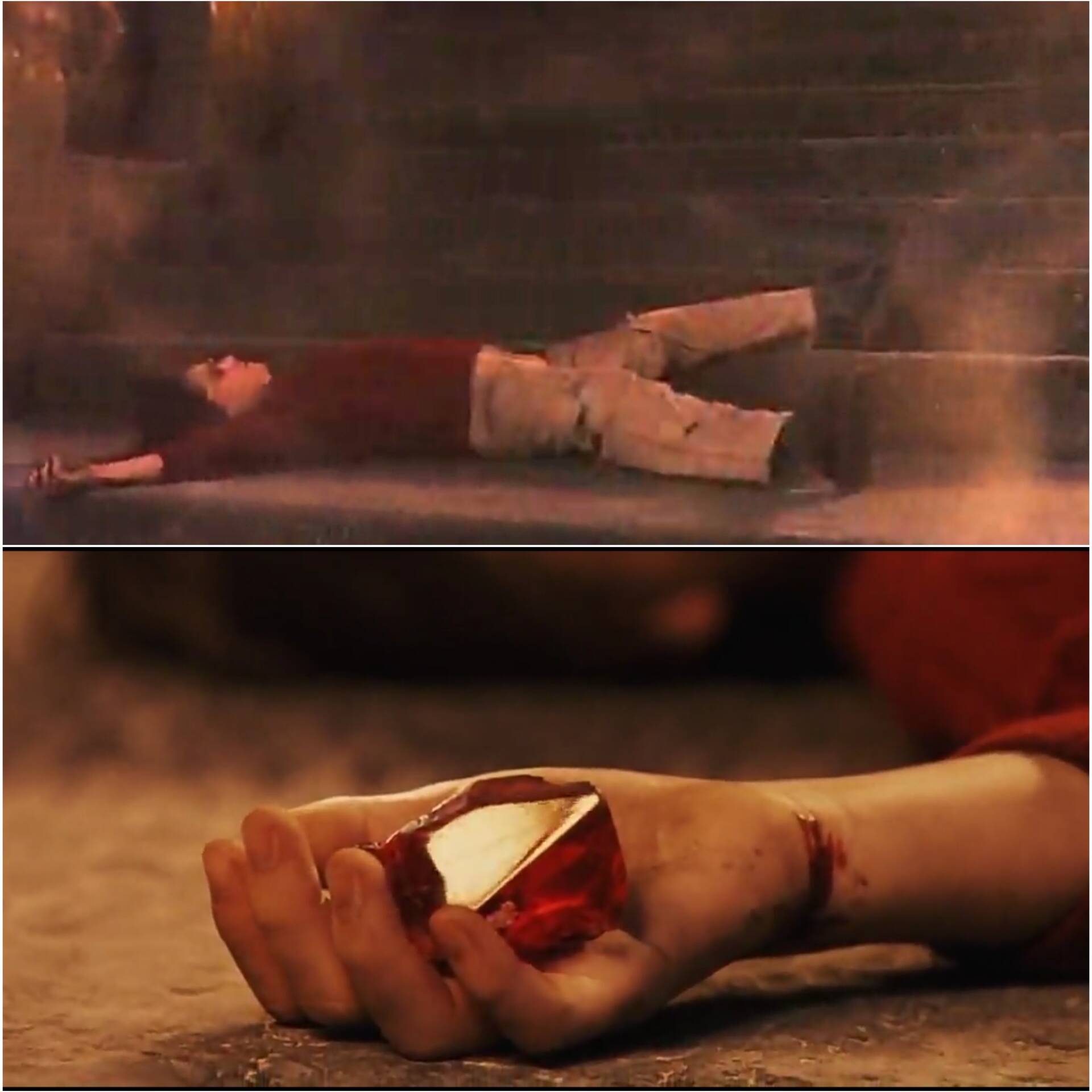 In Philosopher’s Stone when Harry falls after killing Voldemort and all that dramatic scenes of hitting Voldemort’s spirit to Harry which makes him fall, actually, his hand with which he was holding the stone was pretty much hanging in the air because the space on the stair was occupied by his body, but in the next scene when camera focus Harry his hand was sweetly lying on the stair with a bit of space leaving behind like his body was adjusted in between these shots which definitely makes no sense since the hanging hand wasn’t looking messy or odd. 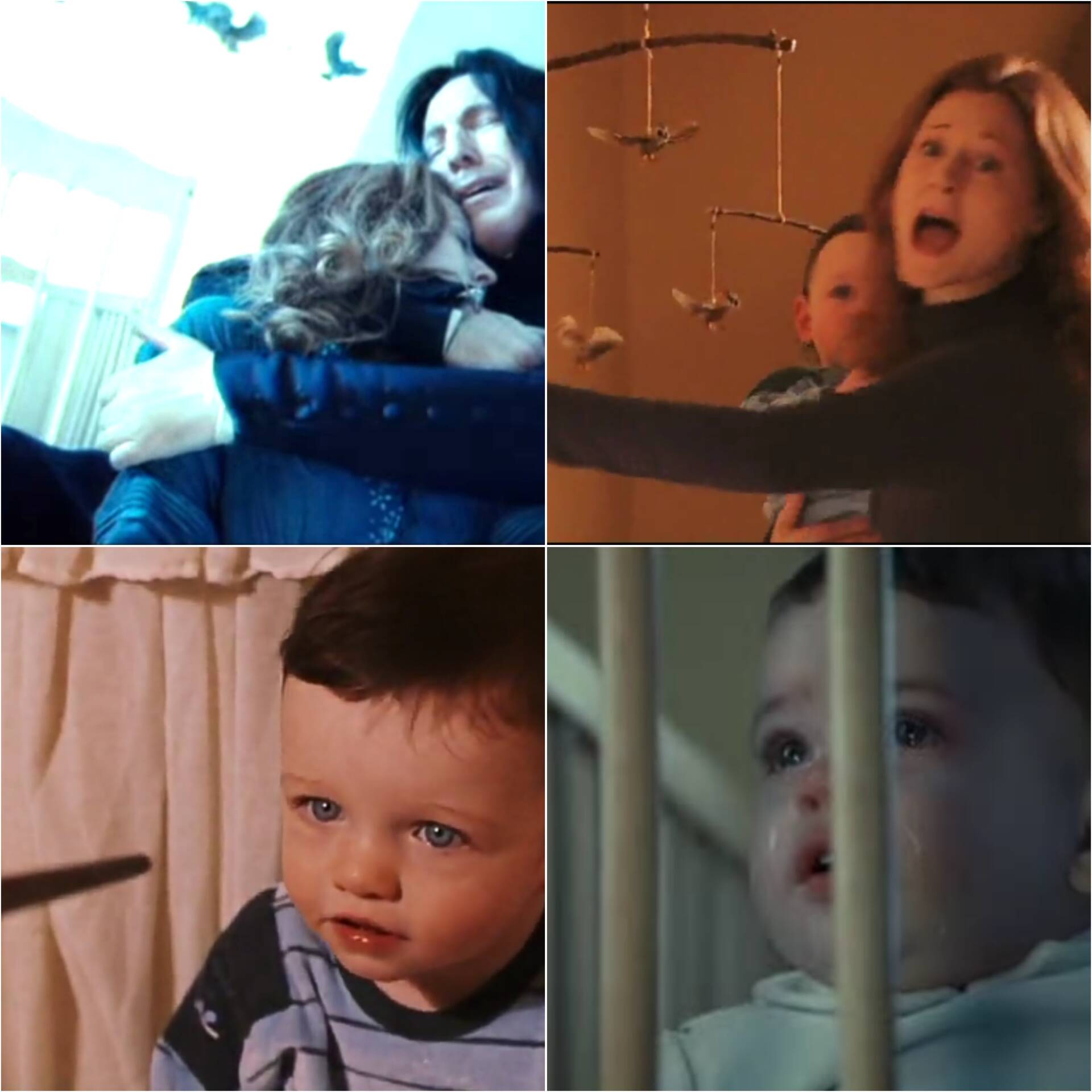 In Philosopher’s Stone when Hagrid was narrating about Harry’s parents’ death we see that Lilly was wearing a turtle neck sweater holding Harry in her arm who was wearing blue and black stripes shirt, but the story takes a turn in Deathly Hallows part 2 when Harry go through to all Snape’s memories and saw his Mother’s dead body and his younger self, this time Lilly was wearing some kind of studded robes and Harry was in all white!  Please, directors, stop messing with the story. 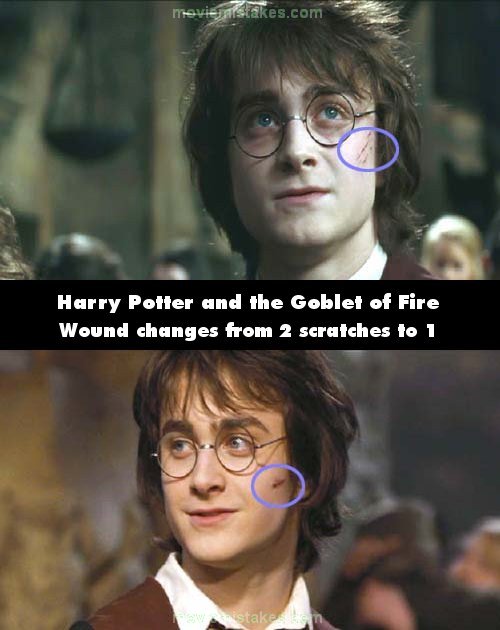 In Goblet of Fire, Harry’s wound sums up in one, in the first scene Harry on his left cheek had two long parallel scratches, while in the very next scene his wounds decided to sum up in one how? He’s was a wizard, not a doctor! 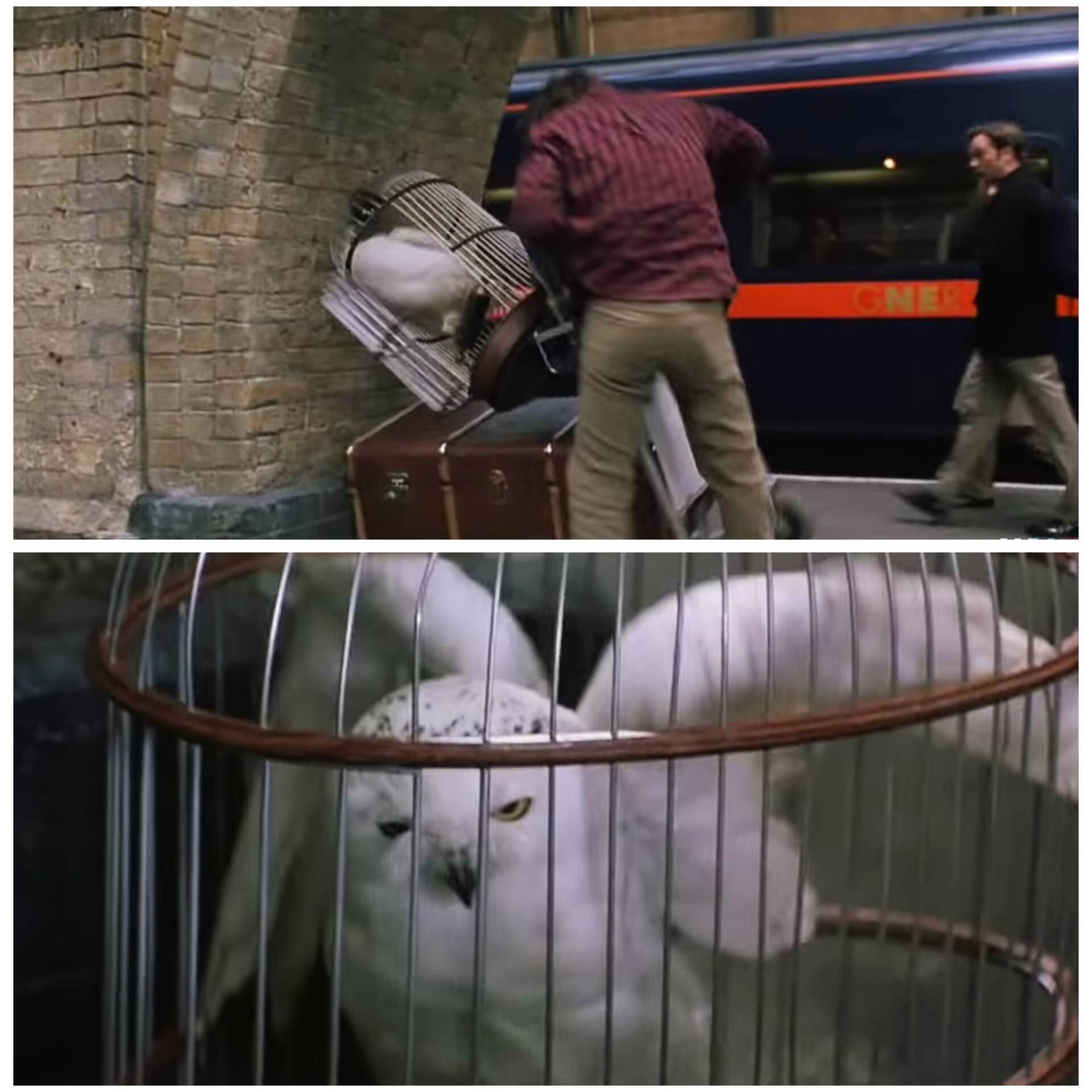 Source: Harry Potter and the Chamber of Secrets

Everyone loves their pets and first pets have a very significant place in their owner’s heart, same goes with Harry in Chamber of Secrets, when he and Ron tried to reach platform 9¾ and the door closes (all hail to Doubt the free elf), they slammed into the wall, but before slamming he switched Hedwig with a toy, which was rigid and didn’t move, while in the next scene they bring back the original Hedwig. They care for that poor owl, but somehow it’s a blooper. 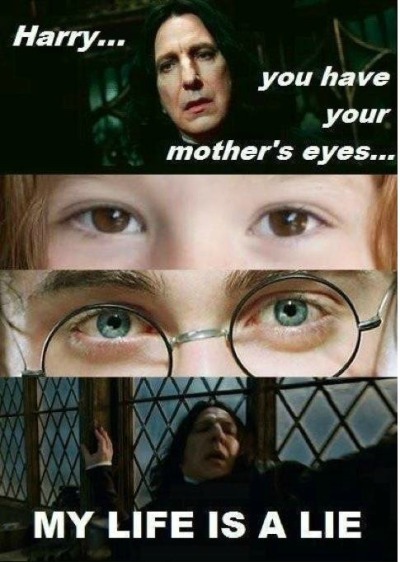 Now this one is the cherry on top! All his life Harry gets compliments that his eyes resemble his mother and in the last part with all Snape’s twisting memories when they took us back in Lily’s and Snape’s childhood when they were friends, they focus on the girl’s eyes and wait what THEY WERE ALL BROWN!

Meanwhile, Snape be like: am I a joke to you?