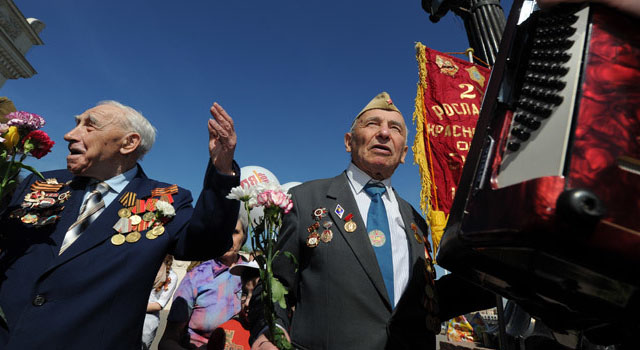 With a mixed feeling of joy and grief, young and old are flooding the streets all across Russia and former Soviet states to commemorate those millions who sacrificed their lives to stop the Nazi horde 69 years ago.

Emotional embraces and red carnations are just some of the modern symbols of appreciation that thousands of Great Patriotic War veterans will receive in every corner of the biggest country on the planet.

Parades big and small will of course showcase Russiaâ€™s current military might, but first of all will honor the sacrifice of some 27 million Soviet citizens that perished during the national struggle against Nazi Germany. The main national parade, as always is taking place in Moscowâ€™s Red Square. More than 11,000 troops, 49 military vehicles and 69 warplanes will grace the spectators in the Russian capital.

The parade marathon was kicked off in Vladivostok in the far east of Russia, home to the country’s Pacific Fleet. After the procession of the armed forces, an “Immortal regiment,” comprised of relatives of those who died during the war, reminded the onlookers of the faces of victory, by holding up pictures of deceased veterans.

St. Petersburg which marked the anniversary of liberation from the siege this year, will also witness the parade on Palace Square followed by a procession of veterans and blockade survivors on the main artery of the city, Nevsky Prospect. Just like in Moscow and other cities across Russia, WWII theme special exhibits will await the spectators on this truly national holiday.

In the Hero City of Sevastopol â€“ home to the Russian Black Sea fleet in Crimea â€“ a total of 70 warplanes and helicopters will feature during the parade on May 9. Afterward a traditional Victory Day military parade will be held with more than 1,000 Russian navy officers and soldiers, Sevastopol’s security forces and local military academies participating in it.

Throughout the day celebrations are being held for war veterans. In Moscow, open air concerts have been organized in major squares with traditional veteransâ€™ meetings held in the cityâ€™s parks. For those eager to taste war-time food rations, a field kitchen is offering samples in the center of Moscow. Similar festivities are planned all across the nation. 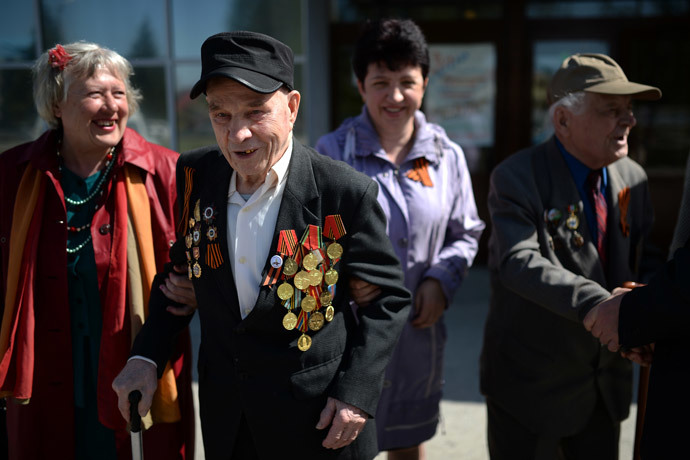 Traditionally, a minute of silence is also observed throughout the country, at 19:00 Moscow time (15:00 GMT). It was introduced in 1965 as a way to commemorate those who died in the Great Patriotic War, as it’s known across the former Soviet Union states. The day will be concluded with spectacular displays of salute and fireworks.

Ukraine, which also marks the 69 anniversary of defeat over Nazi Germany, is being marked with great tensions and a split in society. Most cities have cancelled mass celebrations over fear of violence by the Right Sector, which oppose what they call a Soviet occupation and deny the historical importance of the Soviet multinational fight against Nazi invaders. Earlier this week, Ukraine’s government media watchdog urged the channels not to include Russian war films or documentaries in their rundown.

â€œIf possible, refrain from any mass rallies, and in the case of participation in them, do not to succumb to provocations. Demonstrate tolerance to flags, slogans, and other opinions,â€ coup-installed Prime Minister Arseniy Yatsenyuk said.

The parade will not go ahead in Kiev the head of city administration is afraid of the destabilization of the capital, blaming Russia for possible unrest. Law enforcement were also asking people to avoid clashes and help maintain peace. According to Bondarenko, all SBU and security officers have been placed on high alert. EuroMaidan paramilitary groups will also be keeping order.

In western Ukraine, traditionally more nationalist, in the cities of Ternopol and Lvov, display of all communist symbols and nationalists insignias has been banned. Military parades have also been cancelled as well as the traditional laying of the flower reef next to the Monument to the Unknown Soldier. 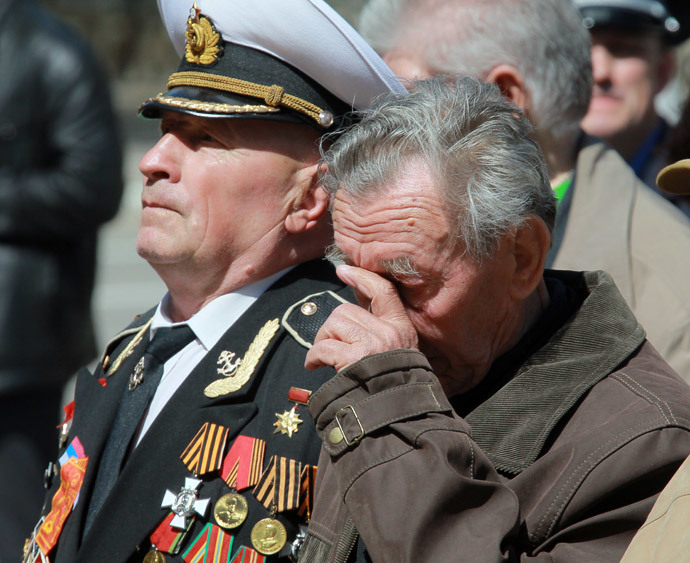 Yet despite the imposed ban, the veterans in Lvov are still planning to hold celebrations. The head of the Lvov veterans association, Timofei Mahanyuk told RT, that despite the ban, he and many of the veterans will fulfil their duty and pay respects to their fellow mates by laying flowers at their graves.

Mahanyuk says that Lvov has become the breeding ground of Ukrainian Nazism. He says that he and many of his veterans always face the possibility of being attacked. But despite a valid threat to their well-being, veterans will hold May 9 festivities.

In the south-east of Ukraine some festivities will take place but celebrations are expected to hit a low note once darkness falls.

In Odessa, the scene of May 2 deadly clashes, authorities will deploy over 2,000 security officers to ensure order amid fears of possible provocations. The parade has been cancelled but locals will have the opportunity to greet the veterans, lay reefs and witness fireworks.

In Lugansk, the parade and the fireworks have been canceled, but residents will have the opportunity to show respect for all those that perished during the world’s bloodiest war. 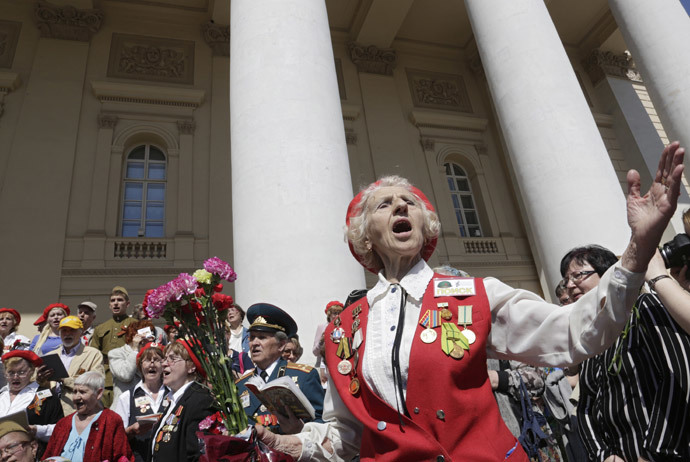